Despite achieving poor results in his A Levels, Simon was determined to reach for the stars and pursue a dream career in Astrophysics. His prospects rocketed after he completed a Foundation Year at UCLan and now he is undertaking a PhD exploring planets beyond our solar system.

Simon has managed to achieve his ambition of following a career in Astrophysics, despite achieving poor results in his A Levels. After applying to undertake a Foundation Year at UCLan then completing the MPhys (Hons) in Astrophysics, he is on track to enjoy a career that is truly out-of-this world.

Simon explains: “The main reason I am now a PhD student is due to completing a Foundation Year at UCLan. I have had a passion for Astronomy since a young age. However, I was not very successful at A Level, achieving only three Grade Ds in Physics, Chemistry and Maths. Despite being told that gaining a degree in Astrophysics (and attending University in general) was very ambitious, I was still determined to apply to university.” 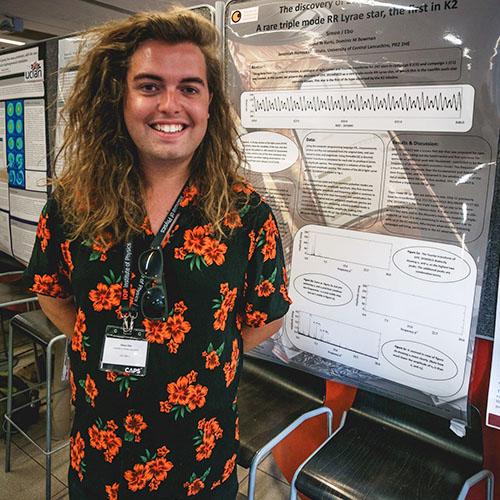 Simon continued: “I was accepted onto the first ever intake of Foundation Year students at UCLan. After achieving a first-class grade, I progressed to the Astrophysics degree. I was enrolled on the MPhys course, achieving a 2.1 classification, and graduated in summer 2018 before starting my PhD the following October.

“Notably, during my degree I completed two summer internships studying Asteroseismology with Professor Don Kurtz in the School of Physical Sciences and Computing. The first of these led to a publication in a notable scientific journal, Monthly Notices of the Royal Astronomical Society (MNRAS), and I was sent to the University of North Carolina Asheville (UNCA) in North Carolina, USA to present our work at an international conference of Physics and Astronomy students.”

After graduation, Simon spent a number of months doing research during a summer internship at Leiden University in The Netherlands and the European Space Agency (ESA)’s Research and Technology Centre.

He is now undertaking a PhD in Astrophysics at UCLan’s Jeremiah Horrocks Institute, where the focus of his research is exoplanets, planets which are orbiting stars other than the Sun.

Simon explains: “I am currently writing a program that will study every star we observe with our own telescope, the Moses Holden Telescope (MHT) at Alston Observatory, before applying it to observations made by the Transiting Exoplanet Survey Satellite (TESS), the latest generation exoplanet space mission. I will hopefully detect, or confirm, new exoplanets and describe their parameters and characteristics.”

Simon has been impressed by the standard of UCLan’s facilities. He said: “UCLan has an extremely underrated Physics and Astronomy department. The quality of research staff is extremely high. It even has its own observatory site in a dark sky area, with the largest working teaching telescope in the UK.”

Simon has ambitions to continue his career in academia after completing his PhD. He has the following advice for anyone who wants to follow in his footsteps and reach for the stars: “Do not worry at all. If you are passionate about something you will succeed. It may take longer than it does for others; you may have to complete a Foundation Year; but you will achieve your goal in the end.”