Liam always had an interest in coaching football as a career so decided to study at UCLan because of the solid links between the University and many football clubs in the North West. He was also impressed by the international summer placements on offer.

Liam says: “I visited other universities but I didn’t feel they matched the course content and they didn’t have the links with potential employers. I also liked the feel of the UCLan campus. UCLan was a good place for me to move into the career I had planned all along. The University matched my ambitions and provided the training and opportunities that I required.”

During his degree, Liam opted to do a 12 month industry placement where he worked at Blackpool Football Club as their First Team Performance Analyst. Liam was then offered a full-time position with the club and decided to continue his final year at university part-time, whilst working at Blackpool F.C.

Liam then went on to Crystal Palace Football Club, making the move South when Ian Holloway became manager. This role included developing a department to match the clubs PL rivals across pre-match, live and post-match analysis

Liam says: “I would not have been offered this position without the initial link that UCLan had with Blackpool F.C. and the opportunity this gave me to meet Ian Holloway and begin a successful working relationship. I was able to establish myself at Crystal Palace F.C. and complete five seasons there under some of the most experienced Premier League managers in the game.”

Liam has now progressed on to a new role, as Head of Recruitment at MK Dons. “The analysis pathway allowed me to become a well-established member of the backroom team at Crystal Palace. I was then recommended for the recruitment role at MK Dons. As my career progressed, I could see the responsibility this role would offer me and it quickly became a natural next step for me to pursue”.

When asked what advice he would offer to those hoping to follow a similar career path, Liam says: “In this field there is a balance between the education that the University offers and the responsibility on the student to form their own career path. The opportunities that UCLan offer to go out on work experience are just as vital as the course content.

In my opinion every student should look to gain significant experience in the field they want to be employed in as this can only lead to a better all-round education and potential jobs after graduation.” 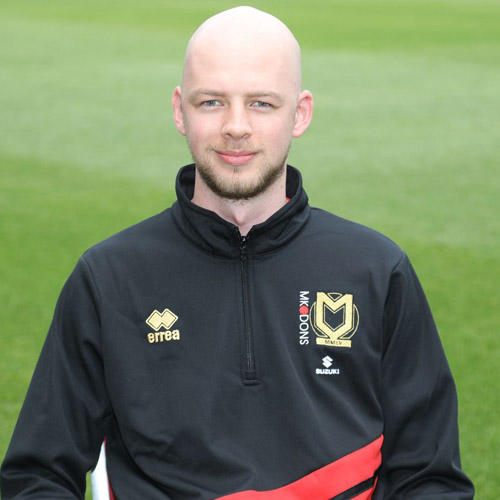