The former Newman College student has recently completed the FA level 1 in Coaching Goalkeepers and impressed enough on the course that she was offered the chance of a placement where she will be mentored by Blackburn Rovers RTC Goalkeeper Coach, Kristian Whalley, and will have access to CPD events throughout the year. 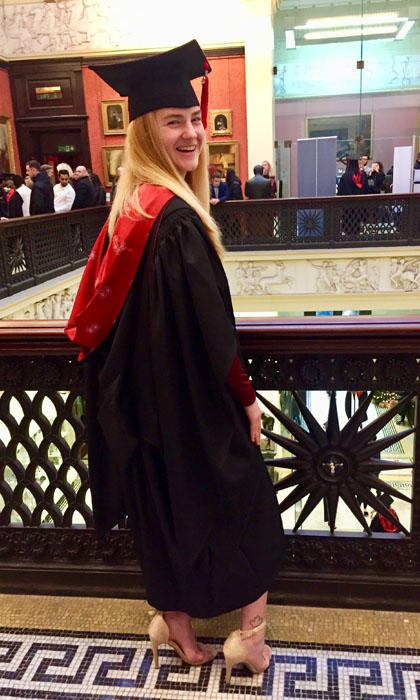 Blackburn Rovers RTC for girls is an integral component of the FA's talented player pathway for 8 to 16 year olds and is considered to be one of the best performing and producing centres in the country by helping players reach their footballing potential with highly qualified and experienced coaches and sports science support.

“I am one of just 5 to be offered an opportunity like this, with the others going to other talent clubs in the North-West.  It’s a great opportunity for me and I’ll get to develop my coaching skills over the year.”

The Coaching Goalkeepers course was arranged through the Sir Tom Finney Soccer Centre and is just one of a number of courses that Caitlin has completed during her time at UCLan.

Football-mad Caitlin supports Arsenal and plays centre-back for Penwortham Town FC Ladies.  She is a Welfare Assistant for Sir Tom Finney Soccer Centre and has spent the last three summers coaching football in North America with Challenger Sports which has taken her to Canada and Alabama, New England and Texas in the United States.

Caitlin is currently studying for a Masters in Physical Education and School Sport is planning on completing a PGCE next year so she can become a PE teacher and believes that it is a career that can run alongside her coaching ambitions.