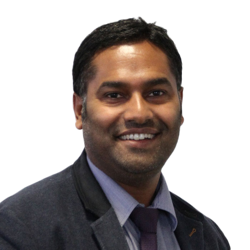 Professor of Biomaterials and Analytical Chemistry
School of Natural Sciences
0

Sub is an internationally leading researcher in molecularly imprinted polymers (MIPs) and their application in electrochemical, optical and acoustic-based biosensing. His lead unique and original contributions to science to date have been (1) the first publication of protein crystallisation facilitated by MIPs (Saridakis, Khurshid et al. 2011); (2) physical characterisation of hydrogel-based MIPs capable of protein recognition (El-Sharif, Hawkins et al. 2014) and (3) the signal amplification of quartz crystal based biosensor strategies (Karousos, Aouabdi et al. 2002). Sub's smart materials work has resulted in the application and granting of UK patents, over 55 paper publications and 20 invited talks at international conferences and workshops. His recent grants as PI and co-PI are from The Wellcome Trust and The Leverhulme Trust. Sub has had papers published in PNAS (Saridakis, Khurshid et al. 2011) and Biomacromolecules (Reddy, Phan et al. 2012) (as a senior corresponding author) for his work on using MIPs for the first time as novel and selective nucleants for protein crystallization and MIP-based protein biosensors. The latter has been in collaboration with Imperial College. The research led to granting of a UK patent (Reddy, SM and Chayen, NE, UK, Patent Application No. 0909502.7; granted 2014) and the technology is now being commercialised through a joint venture between University of Surrey and Imperial College. This is now generating knowledge transfer-based income. Sub has been invited on multiple occasions to be a Panel Member on EPSRC Grant Awarding Panels in Chemistry and Materials and has also been invited to be a Roving Panel Member (2015). He has also presided on RSC studentship Funding Panels. In 2015, he was admitted as Fellow of Royal Society of Chemistry. His research has been featured in Nature Methods Research Highlights for MIPs facilitating protein crystallisation (2011). He is an invited Series co-Editor of a 15 Book Series in Detection Science commissioned by RSC-publishing (from 2011-present). He is also involved in the public communication of science and of his research through stand-up comedy (Bright Club; 2012;2013) and has also appeared on BBC2 in ‘Some boffins with jokes’ as well as at the Edinburgh Fringe (2013) and Winchester Science Festival (2014).

Prof Reddy’s Group at the University of Central Lancashire (UCLan) has vast experience in the development of protein selective receptors, known as molecularly imprinted polymers (MIPs). The technique relies on growing an acrylamide-based hydrogel polymer around a template biomolecule. In a simple processing stage, the MIP monolith is mechanically broken down using metal sieves into micron-sized particles and the particles then washed with bio-release agents. When the biomolecule is removed, ‘ghost’ sites or cavities are left on the polymer particle surfaces which are capable of selectively rebinding the target biomolecule. In effect, the MIP acts as an artificial antibody. It can be mass produced (within hours) and is stable at room temperature for days and for years when refrigerated. In collaboration with The Pirbright Institute, Reddy recently showed for the first time that his smart materials (artificial antibodies) could selectively target and neutralise virus, using a model animal virus. This research was funded by the Welcome Trust (108003/A/15/Z) and published.

The materials are capable of specifically neutralizing virus infectivity in vitro within a short enough incubation time to be clinically relevant. The findings of this study support the further evaluation of MIPs as alternative, stable, and economical “plastic” antibodies that could be used to treat and prevent viral infections. Reddy’s Group has recently developed a new method to produce biologically selective fluorescently labelled MIP particles (F-MIPs) for ease of recording a binding event when the biological target binds to MIP. This has implications for the development of rapid protein and viral diagnostics. Uniquely, Reddy's Group has now developed a new, green, economical and fast method to prepare uniform bare and aldehyde functionalised magnetic nanoparticles (MNPs) in a mere 20 minutes. They have also shown that facile protein tethering to the nanomaterial is possible. Conventional (co-precipitation or solvothermal) methods can take between 8-24 hours to produce the same quality and yield of materials. These MNPs can be biologically modified and have a range of applications e.g. for extraction/separation of targets (e.g. protein, antibody, RNA/DNA, ribosome) from a biological sample, for drug delivery, therapeutics and diagnostics.