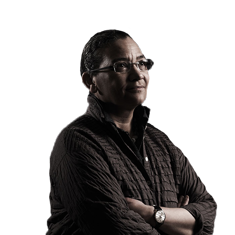 Emeritus Professor in Contemporary Art
School of Arts and Media

Lubaina is research active within the area of Art and Design: History, Theory and Practice and is a member of Making Histories Visible at The Centre for Contemporary Art. Lubaina has won the award for the Turner Prize 2017, one of the world’s most prestigious art awards. In 2018 Lubaina was made a Commander of The Order of the British Empire (CBE) for her services to art.

As a painter, writer and curator Lubaina Himid has participated at an international level in exhibitions conferences books and films on the visual art of the Black Diaspora since the early 1980’s.

Naming the Money(2004) which also appeared as part of the V&A exhibition Uncomfortable Truths (2007), Swallow Hard : The Lancaster Dinner service (2007) and Talking on Corners Speaking in Tongues (2007) were all central to the cultural events surrounding the commemoration of the 200th anniversary the Abolition of the Slave Trade in Britain.

Her contribution to the publication (2005) and conference(2001) Shades of Black Assembling Black Arts in 1980s Britain at Duke University in the U.S.A. spoke of the importance of black artists archiving the history of their own visual contribution.

In Fabrications at CUBE in Manchester a group show in which with her monumental installation Cotton. Com (2002) she explored the tangible yet hidden links between the factories in Manchester and the fields of Carolina. For Inside the Invisible (2001) commissioned by The Leprosy Museum in Bergen she examined the twin dilemmas of identity and belonging, which developed out of the questions asked in the solo exhibitions Plan B at Tate St Ives and Zanzibar at Oriel Mostyn in 2000.; how can you tell the difference between safety and danger.

Curating exhibitions and small interventions in spaces such as the Bowes Museum County Durham (2004) and educational, cultural and community venues in the north west has recently been central to her practice as a visual art facilitator and cultural activist.

As part of the larger project started in the early 80’s with shows such as the Thin Black Line (1986) and Black Woman Time Now(1983) devised to highlight the contribution black artists have made to visual art in Britain, she has with Susan Walsh in collaboration with the Interpretation and Education Team at Tate Liverpool, produced and distributed Open Sesame (2005) and The Point of Collection (2007) These are two DVD/text research documents which examine and reveal the contribution made to the exhibition education and collecting strategies at Tate in recent decades by artists of African, African/American, Asian and Caribbean descent.

Lubaina Himid’s work has been profiled as part of the #100 Works that Belong to You project which celebrates 12 years of acquisitions by the Outset/Frieze Art Fair Fund to benefit the Tate Collection (OFT). 100 works by 69 artists were acquired for the National Collection by OFT between 2003 and 2014 and the video profiling Lubaina’s work can be accessed via Vimeo.

Lubaina was awarded an MBE in June 2010 for services to black women's art. She has spent her 35-year career shining a light on the trade in enslaved people and the contribution made by the people of the Black Diaspora.

In 2019 the Royal Academy of Arts elected Lubaina as a Royal Academician in the category of Painting.

Lubaina helped to organise the Creative Conversations: Black Women Artists Making and Doing two-day symposium in January 2020. In this video, Lubaina and PhD Student Jade Montserrat tell us about the event which was a major celebration of black women’s art in Britain, marking over 40 years of black female artists making an impact in the UK.

Lubaina is a member of Making Histories Visible at The Centre for Contemporary Art.

Naming the Money 100 painted life sized wooden cut outs exploring the trauma of enslavement, the struggle for belonging and strategies for survival.

Invited keynote papers on this work were delivered at:

The Art & Diasporas conference at the Clarke Institute Massachusetts April 2008 The Society for Multi Ethnic studies: Europe and Americas conference in June 2008 a The Collegium for African American Research conference on Diasporas and Migration in March 2009.

Common Wild Flowers Kangas and Other Stories a series of paintings in which audience is asked to engage in discussion around cross cultural exchange contribution visibility and representation. Works from this series will form part of commissions for museum trails and interventions during 2008 and 2009.

Negative positives a series of Guardian newspaper pages gathered during one year in which the subtle narratives behind photographs and headlines relating to people from Africa and the Black Diaspora are revealed, using painted patterns and strategic juxtapositions.

Lubaina Himid was curator of the ContemporaryAnd (C&) ‘Carte de Visite' exhibition at Hollybush Gardens in London from 04 Dec 2015 - 23 Jan 2016. For more details about the exhibition visit Contemporary And (C&) website.