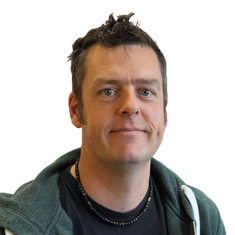 Ian is the Course Leader in BA(hons) Film Production and has taught all areas of film and media for many years. Ian is a Fellow of the Higher Education Academy. Ian is also an external examiner for a number of film and media courses, both nationally and internationally.

As course leader for the Film Production course at the University of Central Lancashire, Ian is involved in teaching across all levels, from first year introduction to final year graduate projects. Ian has co-delivered the the successful feature film module for a number of years, in which, uniquely, our second years produce an entire feature film in less than a year. Building on his background in animation, Ian now specialises in post-production, visual effects, and Motion Graphics.

Ian trained, initially as an animator, working in both 2D and stop-motion. He was also co-director for 17 years of Showme Multimedia Ltd. an award winning media production company, based in Derbyshire. Whilst there he developed interactive content for many clients, specialising in child friendly medical information for groups like, the Health Development Agency and Channel 4. Ian began working at UCLan teaching multimedia alongside other forms of media production. During the 2015 / 2016 academic year Ian worked for HBU-UCLan in Hebei, China, a joint international partnership between UCLan and Hebei University, as head of Media for the three UCLan media courses (Media Production, Film and Animation). During that time he took over as Academic Head, responsible for the successful overseeing of all aspects of the partnership programme. Now returned to the UK, Ian is still involved with HBU and the partnership with UCLan with regular meetings and collaborations. On taking over as Course Leader for Film Production, Ian undertook and wholesale review of the course and instigated a major overhaul of the content offering, updating and strengthening the course in the process.

Ian's research interests revolve around the nature of interactive storytelling and collaborative filmmaking and media projects. He has worked on a number of participatory projects with young people as part of the Centre for Children and Young People's Participation, UCLan and Lancashire Youth Council.