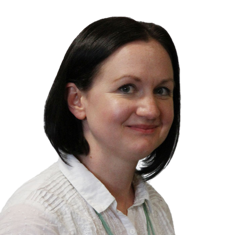 Reader in Curatorial Practice and Place, Co-curator of In Certain Places
School of Arts and Media

Elaine Speight is Reader in Curatorial Practice and Place, and co-curator of In Certain Places – an art-led research project, which brokers connections between people and places. Elaine has written about place-based art and curatorial practice for various publications and presented her work at international events. She supervises post-graduate art practice-based research projects which examine aspects of place. Elaine is a trustee of the arts organisation Art Gene and a regional chair of the Contemporary Visual Arts Network (CVAN).

Elaine’s research interests surround the capacity of art to interrogate, mediate and critique the connections between people and place, and the relationship between art practice and research. Since joining the University in 2013, she has led a number of projects as co-curator of In Certain Places. These include The People’s Canopy (2015) – a two-storey high pedal-powered architectural structure, developed in collaboration with Beijing-based People’s Architecture Office; The Expanded City (2016 – 21) – a three-stage programme of art-led research, commissioned by Preston City Council to inform an extensive housing and infrastructure scheme; and Practising Place (2013-19) – a long-term interdisciplinary project, which has built collaborative partnerships between artists and academics from across the UK.

Individual outputs within such projects include temporary public artworks, community resources, exhibitions, essays, publications, online artworks, architectural products, workshops and conferences. Elaine has written about place-based art and curatorial practice for various books and journals, including Arts – Open Access Journal (2020), Public Art Dialogue (2017) and 'The Everyday Practice of Public Art' (2015, Routledge). She has also edited the books 'Practising Place: Creative and Critical Reflections on Place' (2019, Art Editions North) and 'Subplots to a City: Ten years of In Certain Places' (2014). Elaine has been invited to speak about her work at international events, such as 'On Sound and Space' (2016), organised by the British Art Network and Contemporary Art Society at Tate Britain; 'The Value of Artists: A National Conversation' (2016), organised by the Contemporary Visual Arts Network at Leeds Art Gallery; and 'Place listening, exploring material narratives' (2020), at Concordia University, Montreal. Her projects have been exhibited at the Museum of Modern Art, New York; Bi-City Biennale of Urbanism / Architecture, Hong Kong; and the Venice Biennial of Architecture.

Elaine has over 15 years’ experience of commissioning and curating place-based art projects. She has co-curated In Certain Place since 2005, both within her role at The University of Central Lancashire and, previously, as a curator at The Harris Museum & Art Gallery. She has also undertaken projects for organisations including Liverpool Biennial and Creative Partnerships. Elaine has a particular interest in collaborative working and has formed partnerships with other cultural and academic organisations. In 2015, she devised a professional development programme for arts writers, in collaboration with Dr Rosemary Shirley at Manchester Metropolitan University, which was adopted by the Contemporary Visual Arts Network as one of their three priorities for capacity building within the visual arts in the North West. She has also worked with the national public art think tank, Ixia, to convene 'The Art of Dwelling' (2015) – a national conference, which brought 80 arts professionals together to discuss the challenges and value of long-term approaches to commissioning public art. Elaine has peer reviewed articles for art and interdisciplinary journals such as Cities: The International Journal of Public Policy and Planning, Public Art Dialogue, Literary Geographies and Landscape Research.