An art historian and research fellow from the University of Central Lancashire (UCLan) has been invited to curate a prestigious international art exhibition.

Christine Eyene has been announced as the artistic director of the 2018 International Biennial of Casablanca in Morocco and will work with a variety of international artists for the exhibition.  Founded in 2012, the biennial aims to create dialogue between Moroccan and African artists and the international art scene.

Christine commented: “I am very happy to take up this role as the International Biennial of Casablanca will allow me to make a curatorial statement reflecting my latest research on an international platform.  I’ve been active in the arts for 17 years and in fact worked in Morocco early in my career, so for me it’s a return.

“I plan to curate the biennial around the theme of islands and connecting fluxes; starting with Morocco as a country which shores connect to the Mediterranean and the Atlantic Ocean. I’ll also look at how marginalised spaces, for instance islands that still exist as European colonies, function within contemporary artistic spheres as places for experimental art practices. I’ll consider the British context, with the UK as two islands sliding their way outside of the European Union.”

"I plan to curate the biennial around the theme of islands and connecting fluxes; starting with Morocco as a country which shores connect to the Mediterranean and the Atlantic Ocean."

In addition, Christine, who originates from France, will curate an exhibition at Nottingham’s New Art Exchange from 14 October - 3 January.   Christine has brought together seven artists from diverse cultures; Ain Bailey, Sonia Boyce MBE RA, Linda O'Keeffe, Elsa M'bala, Madeleine Mbida, Magda Stawarska-Beavan and Christine Sun Kim whose work explore sound in a variety of ways from voice to sonic structures to rhythmic patterns, all around a theme of challenging assumptions about women working in male dominated areas.

Christine commented: “It is about creating conversations between artists who don’t know each other; some who are already well established and others who are in the early stages of their career, including Magda Stawarska-Beavan from UCLan, and also showing creative artistic talents that exist all over the UK, not just in London.  I hope this show gives inspiration to young women and encourages them to challenge gender barriers.” 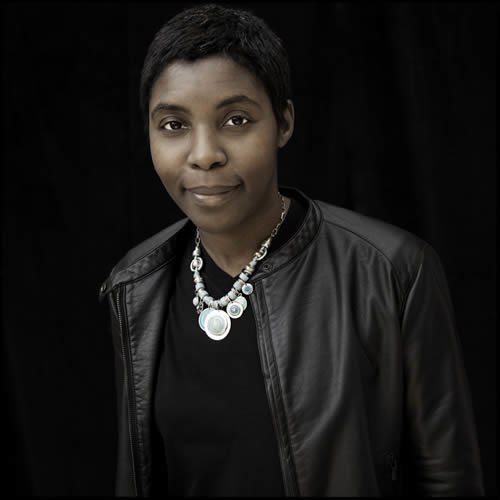 "These days artists need to be able to multitask and I am keen to share these skills with the next generation of talented students."

The curator and art historian who works on UCLan’s Making Histories Visible project, an interdisciplinary visual art research project based at UCLan's Centre for Contemporary Art led by Lubaina Himid, Professor of Contemporary Art, hopes the two exhibitions will also inspire students from the University.

Christine added: “The art world is very challenging so I hope that students find it encouraging to see staff such as Lubaina and myself taking on artistic and curatorial roles internationally.  These days artists need to be able to multitask and I am keen to share these skills with the next generation of talented students.”