UK public given chance to vote on new planet name

The UK public is being given the opportunity to name an exoplanet and its host star as part of a competition run by the International Astronomical Union (IAU) to celebrate its 100th anniversary and launched by Professor Robert Walsh, Professor of Astrophysics at the University of Central Lancashire (UCLan).

Last month, hundreds of UK schools and youth organisations submitted naming ideas, with suggestions ranging from Celtic mythology to UK mountains and connections to Stonehenge. [The full shortlist can be found in notes to editors below].

Worldwide, 92 other countries are also deciding on the names for their own assigned planetary systems, each consisting of an exoplanet – a planet that exists outside of our own solar system – and its host star. The UK’s assigned exoplanet, currently named WASP-13b, is about a third of the mass of Jupiter, whilst its host star, currently named WASP-13, is thought to be larger, hotter, and older than our Sun. This system is over 740 light years from planet Earth.

Over 10,000 young people across the UK suggested over 1,000 individual names for consideration. These were whittled down to a top ten by a team of astronomy experts, with the public now offered the chance to crown a winner.

"This is an amazing chance for people to make their mark on the universe and support the next generation of astronomers – not to mention the opportunity to name a celestial body for all time."

Voting opens on 19 November and closes on 2 December 2019, with the winner announced mid-December. Votes can be cast via the

Professor Robert Walsh, professor of astrophysics at the University of Central Lancashire (UCLan) and UK national outreach coordinator for the IAU, is responsible for overseeing the UK arm of the IAU celebrations. Commenting on the competition, Walsh said: “We have been overwhelmed by the quality of the names proposed and the creativity displayed by our young people. It was incredibly hard to narrow down the entries, but the shortlist is made up of some brilliant suggestions.

“The names chosen for the shortlist come from all corners of our country and have long-standing cultural, historical, or geographical significance to the UK. In the mix are beautiful celestial descriptions in Scottish and Manx Gaelic, ancient island monuments and some of the best areas in the country to observe the night sky. It is now down to the public to vote for their favourites. This is an amazing chance for people to make their mark on the universe and support the next generation of astronomers – not to mention the opportunity to name a celestial body for all time.” 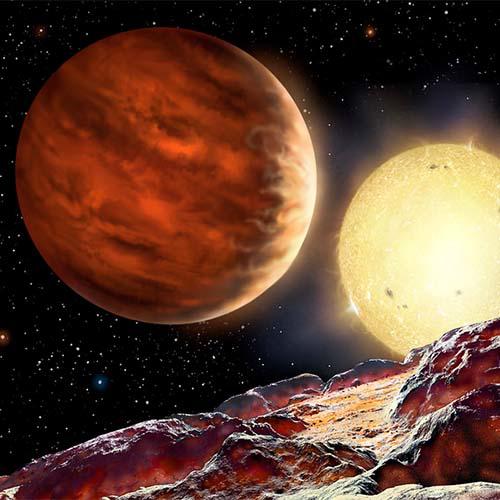 The UK competition is a partnership between the IAU, UCLan, the Science and Technology Facilities Council (STFC), the Royal Astronomical Society, UK European Space Education Research Office, Girlguiding, the University of Warwick, the National Schools Observatory, the Association of Science and Discovery Centres, the British Association of Planetaria and UKFAST.

View an artist's impression of the exoplanet and its star on the UCLan Flickr Gallery.

The shortlist is alphabetical on proposed star name:

The UK specific exoplanet and host star is WASP-13b and WASP-13 respectfully. Their current scientific designation arises from the fact they were investigated by the Wide Angle Search for Planets (WASP) international consortium.

WASP-13 is a star in the Lynx constellation. The star is similar, in terms of metallicity and mass, to our Sun, although it is hotter and most likely older. The star was first observed in 1997 and is 747 light years from Earth.

WASP-13b is an extrasolar planet that was discovered in 2009 in the orbit of the sun-like star WASP-13. The planet has a mass of about a third that of Jupiter but has a radius 22% larger than the gas giant. The exoplanet orbits very close to its host star at approximately only 5% of the distance between the Sun and Earth. It does one full orbit around the star in only four days.

More information can be found at the Wide Angle Search for Planets website as well as at NASA’s Exoplanet Catalog.

About the International Astronomical Union (IAU)

Founded in 1919, the IAU is the world's largest professional body for astronomers bringing together more than 13500 professional astronomers from more than 100 countries worldwide. Its mission is to promote and safeguard astronomy in all its aspects, including research, communication, education and development, through international cooperation. The IAU also serves as the internationally recognised authority for assigning designations to celestial bodies and the surface features on them.

It is celebrating its 100th anniversary in 2019 by organising a wide range of astronomy related events including the opportunity for countries to give names to exoplanets and their host stars.