American-Asian artist Maria Yoon is the author of nine year-long project ‘Maria the Korean Bride’. This project takes the form of a 75 minute documentary, showcasing Maria’s 50 different marriages, to 50 different husbands, across 50 different states of America.

The film has been hosted in multiple galleries and venues since its release in 2013, however 19 March 2018 marked Maria’s first ever ‘Ghost Marriage’ UK debut whilst she guest lectured at the University of Central Lancashire (UCLan).

When asked how she felt about exhibiting the piece to students, Maria showed a keen interest in speaking particularly to universities and colleges: “I’m thrilled to be here at UCLan, this is what I welcome the most and you guys are the first UK audience that I will be showcasing my ghost marriage to, so it’s a big deal.”

Becoming Maria the Korean Bride entailed a long and investigative journey into marriage, commitment and togetherness in America. The 50 marriages, taking part in each state of America, signified the growing pressure to wed faced by Maria and many women worldwide.

"I decided to talk about the issues surrounding marriage by actually going through the notion personally, in every state of America, investigating what it means to be in love or being together."

She said: “My parents were dying to see me get married off. Much to their disappointment, that never happened, or maybe it did happen too many times. I decided to talk about the issues surrounding marriage by actually going through the notion personally, in every state of America, investigating what it means to be in love or being together.”

During her journey, Maria became fascinated with older cultural rituals and beliefs around marriage. This encouraged her to explore ‘ghost marriage’, a centuries-ancient ritual in Chinese culture whereby family members find a husband to “marry” the departed, in order to help put the spirit to rest.

Maria was eager to express that a ghost husband had accompanied her to UCLan: “Currently I’m obsessed with the ghost marriages which take place in the east, this is where the dead marry the dead. I investigated this further over the past summer in Taiwan and mainland China, I’m happy to say I have successfully gotten married in Taiwan. I have a ghost husband with me right now.”

The artist admits that her project still has a long way to go, but hopes to continue the conversation surrounding love and commitment within her work. Maria sees the prospect of a published book alongside her documentary as a way of allowing her work to make a more substantial and powerful statement. 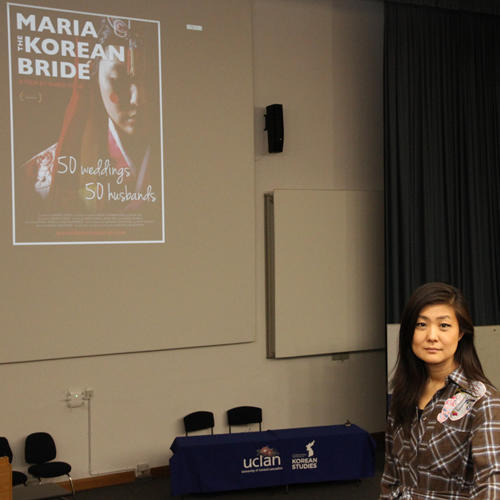 "Your instinct is going to stay with you no matter what and, if you’re a little bit weird like me, that’s ok because there’s not enough weird people in the world."

“I might have to hire a ghost writer,” she said. “Maybe my ghost husband could help, or maybe he’s not helping me enough! I suppose that’s the best husband to have, it’s as if he isn’t there.”

The talk ultimately gave students at UCLan a chance to think about the conversations that Maria logs in her work; rituals, traditions and expectations involving marriage, togetherness and commitment. She encouraged the students to stay true to themselves, expressing that cultural history helps mould them into who they are.

Maria added: “Follow your heart and follow your gut, that’s what I’ve always been doing. Your instinct is going to stay with you no matter what and, if you’re a little bit weird like me, that’s ok because there’s not enough weird people in the world.”