A University of Central Lancashire (UCLan) student has been named the best final year computer games programmer in the country.

Kyle Hobdey beat off stiff competition from more than 400 coding students to claim the Search For A Star 2017 Code award.

The 23-year-old won for his Star Wrangler Arena game, which he built in just four weeks. The winning game tasks players with controlling a little ship with its own magnetosphere to direct falling stars into their goal.

The MComp Computer Games Development student, from Pill, near Bristol, said: “I am overwhelmed by winning. I didn’t think I’d done well enough in the interview to have come first. To go from entering the competition just to gain experience to then winning it is just amazing. I surprised myself with this achievement and it will certainly be a memory that will stick with me forever.”

As well as creating the game, Kyle undertook an online coding test, took part in a networking event and was interview by five high-level industry-leading judges.

Kyle said: “I learned so much over the course of the competition and would definitely like to thank the organisers and industry experts for their time.”

As part of the winning prize, Kyle will receive an interview for a job or internship with one of the leading UK studio partners. He will also receive additional prizes donated by members of the industry, including a high-performance Radeon R9 Nano graphics card donated by AMD.

The University has achieved success in this annual competition in previous years. This year saw two additional UCLan students named as finalists in the coding competition. James Hutchison was shortlisted in the Search For A Star code final for his game Bloxz while first year student Neil Osbaldeston’s Cube Invasion was shortlisted in the Sumo Digital Rising Star 2017 Code Final.

Dr Gareth Bellaby, Course Leader in Computer Games Development, said: “I’m absolutely delighted for Kyle, this is a fantastic award to win and he deserves all the recognition he’ll get for his outstanding work. What is very gratifying for me is the fact that three out of the 10 finalists were UCLan students. That is a great accolade for the course and shows the quality of work the students are producing. The organisers commented that the quality of the finalists this year was very strong so the achievements of Kyle, James and Neil are outstanding.” 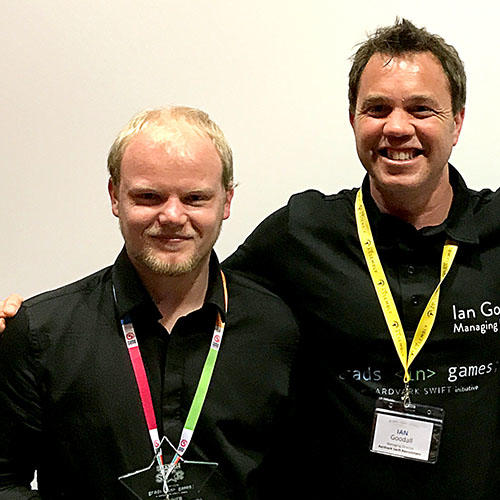