A University of Central Lancashire (UCLan) scriptwriting student is the first recipient of an award named after a late writer from Preston.

The idea for the award came from Janet’s close university friend Ian Hornby. It was open to all writers across three genres of flash fiction, short stories and poetry and was judged by a panel of five, unconnected to the University, who had had no idea of the identity of the entrants. In total 80 people from all over the country entered but, by chance, a mature student on the same MA Scriptwriting course that Janet completed in 2014 was chosen as the winner for her poem, Voodoo Doll No More.

St Anne’s resident Sophie, 44, said: “This award means a lot to me, especially as I’m a new writer so it’s a great confidence boost. I’m a mature student myself and took a leap of faith to return to university to pursue my passion so winning this award confirms that I made the right decision. It’s a real honour to win an award in the name of another dedicated writer from the same course.”

"Sophie is a deserving winner and I was very moved by her poem. I hope this annual award inspires other writers to put pen to paper."

Janet was a part-time scriptwriting student from 2012 to 2014 along with judge Ian, who went onto write plays, film scripts and a book with Janet before her death in 2016.

Ian commented: “Janet would be so pleased about this award as it sums her up completely. She was passionate about developing new writers and having come to university as a mature student, she embraced the course completely and loved every minute of it.”

Sophie received a commemorative plaque and £250 prize money, which she intends to use for a photography course. Second prize went to Sarah Rigby for her short story The Sands and Peter Wilson came third for his story, Water Wars are the Future.

MA Scriptwriting course leader Bill McCoid added: “The award is appropriate and fitting in honour of a lady who will forever be part of the UCLan family. Janet was a very enthusiastic student who followed her dream of becoming a writer and I hope her legacy is continued through this fantastic award. Many congratulations to Sophie who is a very worthy winner.” 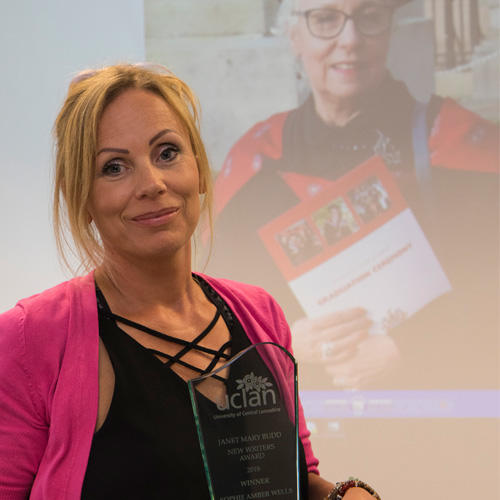