A lost Doctor Who episode from 1965 has been authentically recreated by students, graduates and staff from the University of Central Lancashire (UCLan).

The project, known as Sci-fi in a Week, saw a large university cross-disciplinary team remake the lost episode ‘Mission to the Unknown’ in just five days of rehearsals and filming. This episode is unusual in that it was the only single episode story in the entire 26-year original series run, and also because it is the only story not to feature the regular cast including the Doctor himself who was played at the time by William Hartnell.

‘Mission to the Unknown’ is one of a large number of missing Doctor Who episodes. Unlike some that have been returned to the BBC, this one is likely to stay lost forever as it was never sold or distributed overseas. But, thanks to UCLan’s efforts, it has now been brought to life again in full 1960s glory.

The 25-minute episode, which was originally written as an introduction to the 12-part story ‘The Daleks' Master Plan’, featured Edward de Souza as Space Security Agent Marc Cory and his efforts to warn Earth of the Dalek’s latest plot. Audio recordings from the episode exist and have informed the development of the UCLan version but no original footage is known to have survived.

UCLan Pro Vice-Chancellor (Digital and Creative Industries) Dr Andrew Ireland directed and produced the episode after being given special permission from the BBC and the Terry Nation Estate, which holds the Rights to the Daleks. Nicholas Briggs, who has been the voice of the Daleks on Doctor Who since the series returned in 2005, lent his support to the project by voicing the Daleks for the special UCLan episode.

"We kept it as close to the original as we possibly could, so everything from the props and costumes to the acting style, pace and camera techniques are designed to be very 1960s."

Dr Ireland said: “I’m a huge Doctor Who fan and this episode in particular has always held an air of mystique for me because it experimented with the notion of the Daleks carrying their own storyline without the Doctor present.”

“We kept it as close to the original as we possibly could, so everything from the props and costumes to the acting style, pace and camera techniques are designed to be very 1960s. It was filmed to simulate the low-resolution, black and white look of the era and we’ve been able to use the audio from the original recording to inform stage directions and the mood of the episode.”

The whole show has been created by UCLan students, graduates and staff, with help from Accrington and Rossendale College pupils who were in charge of make-up and prosthetics. It means that students on courses including acting, fashion and TV and media production gain hands-on experience of creating a drama from scratch and are able to compare techniques from more than 50 years ago with modern day drama production.

Dr Ireland said: “It’s a cracking script and remaking it proved to be an exciting challenge and learning experience for all concerned. We often talk about the theory of historical television production techniques, but this project meant the students lived the high-pressured reality of it!”

To make the programme, the UCLan team had to make four sets; a futuristic conference room, a jungle, a rocket ship, and the Dalek Control Room, which was filmed as a miniature set, as well as creating all the props and costumes. It involved four speaking parts plus three Daleks with seven other actors playing aliens. 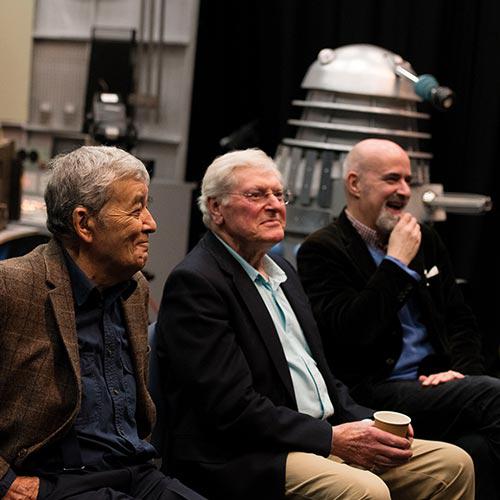 "“This is an absolutely wonderful project, even more so as this episode was a one-off introduction to the massive 12 part ‘Dalek Master Plan’."

The cast and crew were given a treat mid-week when Peter Purves, who played the Doctor’s companion in 1965, and original cast-member Edward de Souza visited the set to see how things were progressing and take part in a special question and answer panel.

Peter said: “This is an absolutely wonderful project, even more so as this episode was a one-off introduction to the massive 12 part ‘Dalek Master Plan’. I can remember at the time that we (That is me and Bill Hartnell) were a bit miffed not to be included in any way at all, but actually it was a nice week off in the end. I am intrigued to see what has been done and hope it could be a precursor to more reconstructions in the future."

UCLan already has strong links with Doctor Who through acting graduate Mandip Gill who currently plays the Doctor’s companion in the series alongside Jodie Whittaker as the first ever female Doctor.

Mandip said: “I am really excited to not only see this lost episode finally, but to see what the team has created in just five days of rehearsals and filming. I am very proud of UCLan, it gave me a lot and I am thrilled to see it also give back a lost part of sci-fi history. Who knows where it could end up!”

The UCLan team treated the BBC as the client for the project and that set a high professional bar for the cast and crew to aspire to.

Dr Ireland added: “We will give the BBC a copy of the episode and hopefully one day it may become available for people to see. Who knows? To achieve what we have in the time we had is a massive achievement and I want to thank everyone involved for all their efforts.”