The University of Central Lancashire’s (UCLan) Professor of Stroke Care Caroline Watkins has been made a dame by Prince Charles at Buckingham Palace.

Professor Caroline Watkins, who is the only nursing stroke care professor in the UK, was honoured by the Prince of Wales for her services to stroke and nursing care after it was announced she was to receive the DBE in the Queen’s New Year’s Honours List.

She was the first of 88 recipients to be awarded on the day said the whole experience “felt like a dream.”

“Prince Charles was lovely and much more quietly spoken that I imagined” Caroline said.  “He asked a bit about what I did and said he hoped I wouldn’t be retiring anytime soon.  I of course assured him that it isn’t on the agenda for quite a while.”

Other recipients at the ceremony included GB Olympians and Ray Davis from The Kinks, who received a Knighthood and sat next to Caroline during the service.

"My mum was absolutely delighted and even managed to get a seat on the front row, which made it even better. It was just a fantastic day, even if I was so nervous beforehand I couldn’t put my nail varnish on properly."

She said: “Ray was very modest and unassuming.  After the ceremony we shook hands and congratulated each other, so that’s something to remember.”

Caroline took her husband Kevin, son Josh and 96-year-old mum Ivy to Buckingham Palace to share her day.  She bought a new outfit from John Lewis for the occasion but made use of a hat she last wore 21 years ago on another very special day.

“Both my mum and I wore the hats we bought for my wedding day in 1996.  If someone had told me at the time that we would be wearing them again all these years later to visit Buckingham Palace I don’t think I would’ve believed them” she commented.

Caroline added: “My mum was absolutely delighted and even managed to get a seat on the front row, which made it even better.  It was just a fantastic day, even if I was so nervous beforehand I couldn’t put my nail varnish on properly.”

Caroline has been a nurse for nearly 40 years and has worked at UCLan for 15 years.  Most recently she has co-led, with her close colleague and childhood friend Denise Forshaw, the UK arm of an international study into acute stroke care called HeadPost, which is one of the largest trials of a nursing care in the world.  She is also Director of the Lancashire Clinical Trials Unit, a Fellow of the European Stroke Organisation and a member of the World Stroke Organisation.

Last year Caroline was recognised with a Special Recognition Life After Stroke Award by the Stroke Association for her contribution to improving the lives of stroke survivors through better stroke care and research. 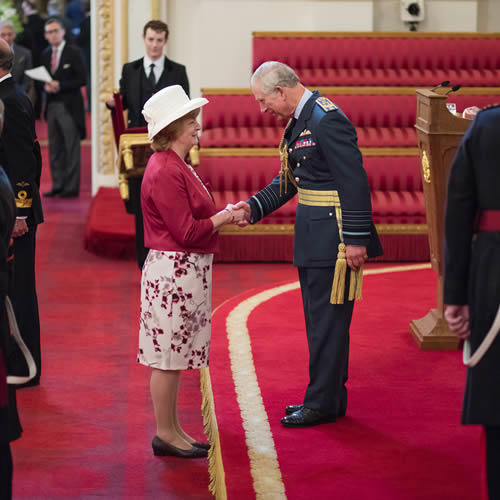 Professor Caroline Watkins and the Prince of Wales