The University of Central Lancashire’s (UCLan) pioneering approach to dental education has today been named as one of the UK’s 100 best breakthroughs for its significant impact on people’s everyday lives.

UCLan’s School of Dentistry is honoured in the UK’s Best Breakthroughs list of the last century for its ground-breaking work in improving local oral health.

The School, which celebrates its 10th anniversary this year, is having a big impact on the local community. One of only two new dental schools to be created in England for more than 100 years, its students have treated more than 23,000 patients during their training and the School has produced 251 new dentists who have expanded the region’s dental workforce considerably.

The Dental School was the first to execute a new model of dental education, which allows graduate entry Bachelor of Dental Surgery students to gain their experience in in areas of high need and poor dental health where access to NHS dentistry was previously limited. Working in local community Dental Education Centres (DECs) in Accrington, Blackpool, Carlisle and Morecambe Bay, rather than city centre hospitals, has proven to have a positive impact on the communities the Centres serve.

The list of breakthroughs demonstrates how UK universities are at the forefront of some of the world’s most important discoveries, innovations and social initiatives, including the discovery of penicillin, work tackling plastic pollution, ultrasound scans to check the health of unborn babies and the establishment of the Living Wage.

The list also highlights the less celebrated but vital breakthroughs that transform lives, including a specially-designed bra to help women undergoing radiotherapy; a toilet that flushes human waste without the need for water; the development of a new scrum technique to make rugby safer; a sports initiative that aims to use football to resolve conflict in divided communities; - and even work to protect the quality of the chocolate we eat.

The list was compiled by Universities UK, the umbrella group for UK universities, as part of the MadeAtUni campaign to change public perceptions of universities and bring to life the difference they make to people, lives and communities across the UK.

It follows independent research undertaken by Britain Thinks which found that the public has little understanding of the benefits of universities beyond undergraduate teaching. The findings show that research is one of the key triggers to change opinion about universities but for many people, it is an abstract concept.

"It is a fantastic achievement for the UCLan School of Dentistry to be featured in the UK’s Best Breakthrough list. We’re extremely proud of the work we have done over the last ten years and difference we are making to people, lives and communities."

Angela Magee, Head of the UCLan School of Dentistry, said: “It is a fantastic achievement for the UCLan School of Dentistry to be featured in the UK’s Best Breakthrough list. We’re extremely proud of the work we have done over the last ten years and difference we are making to people, lives and communities. This recognition is a fitting way to mark our 10th anniversary and we can proudly say that over the last decade UCLan has produced more than 250 fully qualified dentists who have gone onto work in the NHS, filling a skills gap in areas of the region that lacked local dental services.

“The MadeAtUni campaign is an incredibly important initiative for UCLan as it allows students, alumni, the local community and the wider population to understand the work that we do and the impact it has.”

Professor Dame Janet Beer, President of Universities UK, said: “Universities really do transform lives. The technology we use every day, the medicines that save lives, the teachers who inspire – all come from UK universities and the important work being done by academics.

“The UK’s Best Breakthroughs list is a testament to the difference that universities make to people’s lives and we want everyone to join us in celebrating the work they do.”

The UK’s Best Breakthroughs list: 100+ Ways Universities Have Improved Everyday Life was put together in partnership with universities across the UK. As part of the MadeAtUni campaign, every university in the country was invited to nominate the one thing from their institution which they believe has had the biggest impact on people, lives and communities.

You can find out more about the UK’s Best Breakthroughs and the MadeAtUni campaign here.

The UCLan School of Dentistry has also produced a series of informative lecturers about dental health care that are available online. 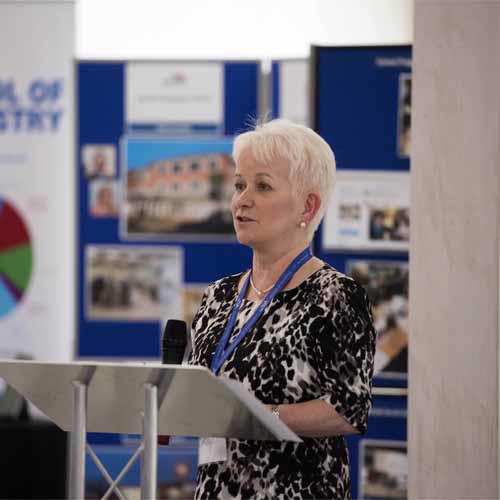 Angela Magee, Head of the UCLan School of Dentistry