A University of Central Lancashire (UCLan) student has won an international architecture competition for her Liverpool World Heritage Docks designs.

Maryam Al-irhayim, a 21-year-old third year architecture student, was selected ahead of hundreds of other participants from around the world to win the Prix Versailles 2018 Student Competition Awards with UCLan being the only UK University to make it through to the final.

The international competition invited entrants to consider the UNESCO World Heritage status of Liverpool Maritime Mercantile City and suggest how to redevelop areas of the unused port to meet the needs of the city and optimise the potential of Liverpool, without undermining the outstanding universal value of this World Heritage Site. Recognising the importance of football to Liverpool’s identity, entrants were also asked to include ideas for a new stadium in the context of a sensitive urban design.

The Liverpool Maritime Mercantile City makes up six separate locations in the city centre, each relating to a different area and time in Liverpool's maritime history. Maryam, who was born in Malaysia and has lived in Liverpool for quite some time, came up with a design entitled ‘A Gateway to the Mersey’.

She said: “It was a surprise to win first prize and this reward gives me more confidence to stand by my work."

"The context is very important in architecture. I studied the history of the site and the idea developed from a forgotten memory of the port."

A time when merchants coming from around the world would enter the docks transporting their goods to the storage building, which is also the largest brick building in Europe, smelling the tobacco from the warehouse that is now the Titanic Hotel. People would witness this event, of traders along the castle like wall that surrounds the street in between the dock.

“This acts as an entrance to Liverpool and led to my creation of ‘A Gateway into the Mersey’, containing a new football stadium surrounded by commercial and residential spaces encapsulated by designed public space.”

Highlights of Maryam’s design include a new green stadium that follows FIFA’s standards with a capacity of up to 63,000 fans, new methods to generate energy and an integrated public space within high-rise all designed in harmony within the context using new materials.

The 21-year-old British Iraqi, who went to school in Dubai before moving to the UK, believes heritage and architecture go together and relished the challenge of the project.

She said: “Most cities develop over time and I was quite fortunate to see some new cities develop like Dubai and Kula Lumpur. The quote by Sir Norman Foster was right in saying, ‘as an architect you design for the present, with an awareness of the past for a future that is essentially unknown.’ Therefore, I think if we study and understand the past well, we can design a better future." 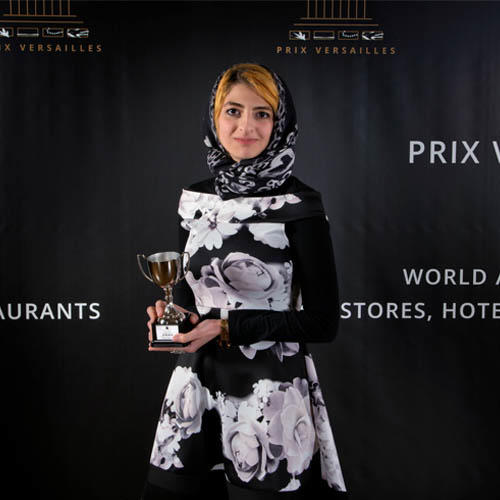 "Liverpool, in particular, has a strong heritage background as designated by UNESCO so it was challenging to try and integrate a new programme to an existing historic urban fabric. That required a lot of research and site analysis."

The Prix Versailles, which hosts the World Architecture Awards for stores, hotels and restaurants, isn’t the first competition Maryam has entered. The ambitious student has also took part in competitions in furniture design, sustainable housing and the rebuilding of Iraq’s liberated areas.

Des Fagan, Academic Leader at the Institute of Architecture at UCLan, commented: “Maryam’s work looked at the master planning of the World Heritage site at Liverpool and asks key questions about its UNESCO listing as the Maritime Mercantile City. We encourage all of our students to work on live projects that question the way cities are put together - her UNESCO award is rightful recognition of all her hard work at an international level.”

Maryam added: “The city has its own character. It embraces life, especially in the form of music and art and there is always something happening in Liverpool. This history is captured within the city and it unravels in the form of architecture. The location is really what sets itself apart; the Mersey rivers waves change but it’s still the same waters. That’s Liverpool to me.”