Theresa May suffers in Twittersphere analysis

Theresa May began facing more hostility on Twitter than Jeremy Corbyn following her decision to call a snap election, according to research from the University of Central Lancashire (UCLan).

The number of hostile tweets aimed at the Prime Minister rose after the announcement on 18 April and surpassed those aimed at Mr Corbyn in the week commencing 23 April. Hostility aimed at Mrs May continued to rise in May.

Academics at UCLan analysed all @ messages sent to the 565 MPs who use Twitter since 22 December 2016. Using machine learning software, these messages were then ranked as either positive, neutral, disagree, or hostile. These tweets were then analysed to identify the most frequent terms used over time, excluding common words.

When the election was announced on 18 April 2017, the term ‘NHS’ rose up the rankings, though remaining behind ‘Brexit’.

"These are early results, but they supply an interesting alternative to traditional polling data, showing strength of feeling and issues of concern rather than voting intention."

From 17 May 2017, ‘hunting’ and ‘fox’ became the most common terms in hostile tweets aimed at Theresa May, following her pledge to include a free vote on repealing the ban on fox hunting in the Tory Manifesto.

In hostile tweets aimed at Jeremy Corbyn, ‘Labour’ was the most commonly used term, with ‘Brexit’ and ‘EU’ both close to the top in the weeks surrounding the signing of Article 50.

The proportion of hostile tweets as a total of all @messages may be affected by the large scale production of positive tweets by bots. However, this research highlights that the calling of the election marked a change for both leaders.

Commenting on the findings, Amy Binns said: “These are early results, but they supply an interesting alternative to traditional polling data, showing strength of feeling and issues of concern rather than voting intention.

“Jeremy Corbyn has consistently received far more @messages than Theresa May, perhaps because the demographics of Twitter are skewed towards younger people who may be more interested in him. Hostility towards him appeared to peak around the signing of Article 50. For Mrs May, the announcement of the election marked an increase in levels of hostility.” 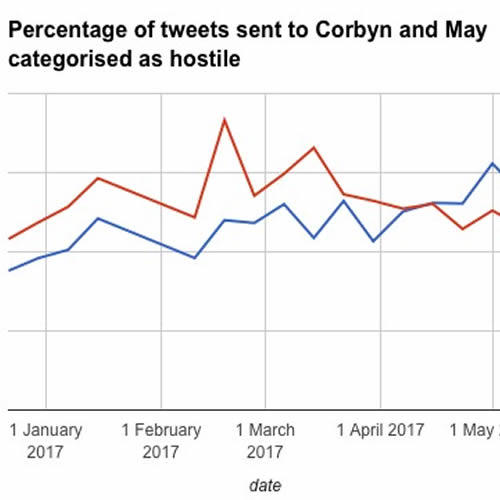 Percentage of tweets to Jeremy Corbyn & Theresa May