The former Chief Prosecutor for the North West, Nazir Afzal OBE, has given his backing to a new global network fighting honour-based abuse.

The senior British lawyer was at the launch of the University of Central Lancashire’s (UCLan) Honour Abuse Research Matrix (HARM), which will bring people together to influence policies and develop new strategies in the fight against honour-based abuse, violence, killings and forced marriage.

Speaking at the event, Nazir discussed his experiences of dealing with honour-based violence and forced marriages in his career. He said: “Without evidence, you might as well give up. It’s about sharing good practice and that’s what the HARM network will do.

“Be courageous. A network gives you the ability to have that support. Resilience comes from networks, from having people around you that can support you. That is why this network is important. It’s not just about sharing information, it’s about giving you support.”

The HARM network, in association with UCLan’s Criminal Justice Partnership, will act as a think-tank for government agencies and charities to help them plug the gaps in services that provide specialist support for victims of honour-based abuse and create a blueprint for how services can be delivered at both regional and national levels.

"A key aim is to give victims a voice and put their needs at the heart of decision-making. Already, 34 partners, including five police forces and 12 charities, have signed up to be part of the HARM Network to work on collaborative projects."

UCLan’s Dr Roxanne Khan, Director of the HARM Network, said: “This is a milestone moment in the fight to combat honour abuse, forced marriage, female genital mutilation and religious homophobia. A key aim is to give victims a voice and put their needs at the heart of decision-making. Already, 34 partners, including five police forces and 12 charities, have signed up to be part of the HARM Network to work on collaborative projects.”

The HARM Network invited Faeeza Vaid, the Executive Director of Muslim Women's Network, to talk about her work to improve social justice and equality for Muslim women and girls.

In addition, HARM is already working with Lancashire Constabulary and the University of Bolton to investigate the experiences of gay South Asian people living in Lancashire. Matt Mahmood-Ogston, from the Naz & Matt Foundation, spoke about his efforts to address religious homophobia after his long-term partner Dr Naz Mahmood took his own life two days after coming out to his parents.

Matt commented: “Because of tragic stories like ours, it’s really important that none of us operate in a bubble. The world and this problem is too big for any one group to tackle on their own. We could do so much more and to great effect and help more people if only we tap into the minds, resources and data that each of us possess. This is the power of the HARM network.”

To find out more, visit the event’s storyboard.

View images from the event on the UCLan Flickr gallery. 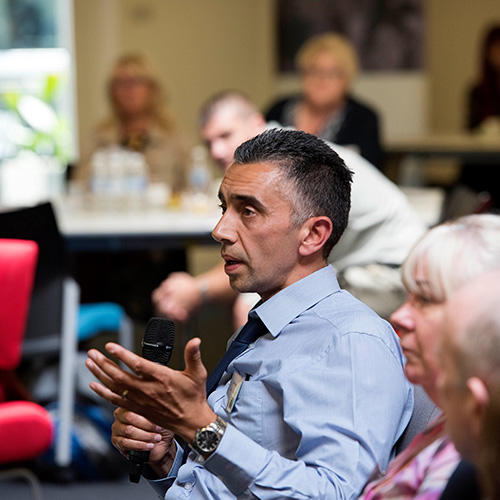