Success in California for local illustrator

A Poulton illustrator had reason to celebrate at his University of Central Lancashire (UCLan) graduation ceremony after seeing his work sell out at a Californian art exhibition.

George Townley was one of 50 international artists to exhibit his ‘Spirited Away’ illustration, inspired by the film of the same name and directed by Hayao Miyazaki, at the Spoke Art gallery in San Francisco.  Within three days, all of his 100 limited edition prints of a large Japanese bathhouse had sold out.

The 21-year-old former Hodgson High School and Blackpool Sixth Form pupil said: “I was actually already working on the print for a personal project when I realised Spoke Art gallery was running an exhibition in tribute to Hayao Miyazaki.  I sent them my work four days before the exhibition began and they agreed to include it straight away.

“To have my work on display in such an established pop art gallery alongside other artists that I look up to is amazing and something I am very proud of.”

"Winning a D&AD Award as well as achieving success in America is a fantastic way to end my time at university."

George has since exhibited another piece of work at Spoke Art with two other exhibitions already in the pipeline for its sister galleries in New York and Oregon.  Much of his work is centred around landscape and architecture in the USA, something which comes from spending the first semester of his second year studying at California State University San Marcos.

He said: “Living and studying in California helped me to realise my passion.  I think experiencing a big change in my environment and living away from home for the first time inspired me to take my work in a new direction.”

In addition, the ambitious designer who this week graduated from UCLan with a 2:1 degree in illustration, has won a prestigious Design and Art Direction (D&AD) New Blood award for a collaborative piece of work he completed with graphic design student Harriet Richardson in the last year of his degree.  Considered to be the Oscars of the design industry, the New Blood awards are open worldwide and winners receive the prestigious ‘coloured pencils’ which represent the very best in design and advertising.

George, who also sells his work online, added: “I like to put myself out there and see what I can achieve.  Winning a D&AD Award as well as achieving success in America is a fantastic way to end my time at university.” 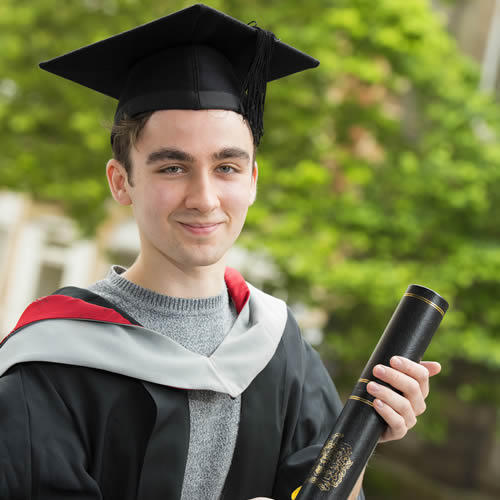