A unique creative partnership has seen famous faces from Coronation Street and Emmerdale share the small screen with students from the University of Central Lancashire (UCLan).

ITV Studios and the Preston-based institution have worked together in an industry first to create a Soap in a Week.

The project saw 50 cast and crew work alongside 90 undergraduates and alumni to write, produce, act and direct a 15 minute drama. The filming took place across the University’s city centre campus, including the new outdoor ‘street’ – a purpose built facility which features external frontage of a pub, a shop and two houses.

Coronation Street’s Connor McIntyre and Tisha Merry and Emmerdale’s Michelle Hardwick and Anthony Quinlan were the professionals who were cast in main roles alongside the students.

Connor, who plays Pat Phelan in the world’s longest-running TV continuing drama, said: “It’s a fantastic initiative and one which I’m delighted to be part of. I have been really impressed with the commitment of the students. They have grasped this unique chance with both hands, they have been very professional in their attitude and they have worked so hard. It’s been a very professional set up and everyone should be proud of the work they’ve done.”

Over the week, two days were spent on crafting and tweaking the script, two were spent on rehearsals and filming while the final day was spent on post-production.

"It’s a fantastic initiative and one which I’m delighted to be part of. I have been really impressed with the commitment of the students. They have grasped this unique chance with both hands."

Television production student Sam Green was given a key role throughout the week as one of the producers. The 19-year-old said: “It’s been a phenomenal week and I’m delighted it’s gone so well. One of the best things about this whole experience has been getting access to some of the biggest names in the business. We’ve been able to speak to everyone from ITV, from the lighting people to the scriptwriters, and I’ve learned so much from them in such a short space of time. I want to work as a TV sports producer in the future so this has given me a great taste of what I can expect.”

Acting graduate Samantha Allen came back to UCLan to take part in the exciting project after graduating in 2014. She said: “Having this opportunity to come and work with these industry professionals from ITV and be put in a scenario where you don’t necessarily have the pressure of a full on contracted job, but being able to put that into practice in the same professional environment is amazing.”

Laura Haywood, a media production and technology student, acted as one of the camera operators. She added: “This is such an amazing experience to be a part of. Not only is it going to look great on my CV but it’s also allowing me to boost my skillset and give me the confidence I need for the industry itself.”

Mark Bickerton, ITV’s Head of Editorial Engagement, added: “I’m delighted UCLan gave us the chance to do this together. It’s been a dream of mine for a while to produce a soap in a week and this has exceeded my expectations in so many ways. The students have been absolutely fantastic from day one; their commitment has been great and the skills they’ve brought are industry standard. I’m really confident they can be the next generation of ITV creatives.” 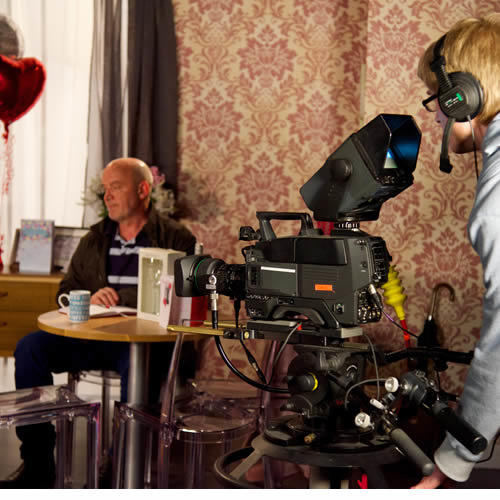 "I’m delighted UCLan gave us the chance to do this together. It’s been a dream of mine for a while to produce a soap in a week and this has exceeded my expectations in so many ways."

After cutting the ribbon Phil said: “This Soap in a Week project is really exciting for us at ITV and one we’re delighted to be doing with the University of Central Lancashire. The facilities here are fantastic; the new set is amazing and it will be such a great educational tool to help students come out at the other end with practical industry knowledge.”

Dr Andrew Ireland commented: “This is a fantastic initiative and one we believe is crucial to the development of our creative students.

“We are passionate about giving our students the best chance of gaining a job in the media industry once they graduate. Our industry contacts have told us there are skills’ gaps in the television production industry. By having this television set on campus it means our students will work in an environment similar to a television production company and they will develop the required level of technical skills. The University’s motto is innovative thinking for the real-world and this is a prime example of that in action.”

He added: “The College of Culture and the Creative Industries is planning a number of initiatives that use simulations of real world experiences to address skills gaps in graduates wishing to work within broadcast industry. SPARK (Simulation Park) provides opportunities for learning through simulation and we are currently developing a curriculum working closely with industry partners.”

Take a look at some of the photos in our Flickr gallery.