A University of Central Lancashire (UCLan) student has designed a structure made entirely from bamboo in a bid to tackle air pollution, education and homelessness in Vietnam.

Enzo Vellin, from Mauritius, will graduate with a degree in architecture at the end of the month and wanted to use his final project to experiment with sustainable materials that could potentially replace traditional construction materials, such as concrete, steel and timber.

The 21-year-old’s work was inspired by a trip to Vietnam last year, where he believes this type of structure could bring significant benefits to local people.

Enzo said: “During my time in Vietnam I became aware of certain issues affecting the environment that needed to be addressed, which is where my inspiration came from to create a 100 per cent bamboo school and research facility in the middle of Ho Chi Minh City.

“The aim of my project is to combat air pollution, education and homelessness through architecture and I have positioned the building in the middle of a major city in the hope that other organisations looking to build infrastructure in the area would do the same.”

Using a variety of computer software, Enzo carried out a number of stress tests which he used to maximise the strength of the bamboo building.

He said: “The tests were extremely important as they allowed me to ensure that the materials being used were not only sustainable but would function in the same way as traditional building materials, making it safe to build."

"UCLan has given me a platform to develop my skills as an architect which will give me a good start in my future career. I would like to find a job as an architectural intern and I am currently discussing opportunities with companies in Europe."

“I was introduced to UCLan in Mauritius when looking at options to study in the UK. The Architecture course stood out to me because it is accredited by the Royal Institute of British Architects and the Preston campus is in the centre of major cities such as Manchester and Liverpool.

“My tutors have become friends throughout my three years at UCLan and have supported me with everything from the very beginning. I will always recommend the University to friends and family looking to study in the UK.”

Enzo’s project has also earned him a Lancashire Arts Festival Award in the Architecture category, which is sponsored by Creative Lancashire; Lancashire County Council’s team dedicated to raising the profile of creative industries in the area. 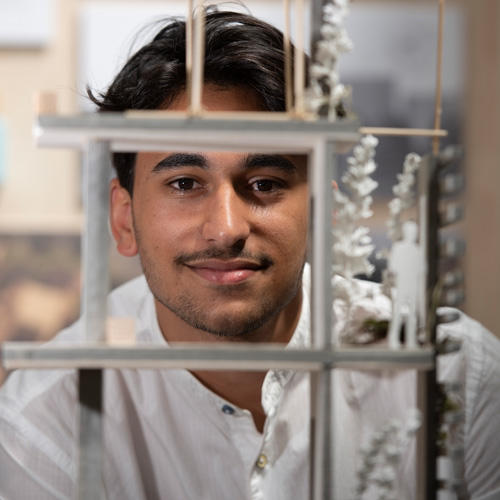