Forensic science experts from the University of Central Lancashire (UCLan) have brought crime scene investigators (CSI) and police staff from across Europe together for a specialist exercise in examining previously undiscovered graves.

The idea behind the three-day event was to share the best ways to search for, locate and excavate human remains in cases of clandestine burial in order to maximise information and forensic evidence recovery from graves once they have been discovered.

Participants came from several European countries including Germany, Denmark, Sweden, Portugal, The Netherlands and the UK to learn new techniques from each other and develop a European-wide best practice approach to investigating clandestine graves.

They were given the scenario of trying to find several shallow graves in the grounds of a former residential care home with known historical abuse, and where patients had gone missing.  Here they tested a variety of tools including hi-tech ground penetrating radars, drones and 3D laser scanning alongside the humble trowel for digging.

Reader in Biological and Forensic Anthropology at UCLan Dr Patrick Randolph-Quinney helped to organise the event.

"This is a rare opportunity for experts from different forensic fields and countries to share working practice in a human remains search and recovery scenario."

He said: “Police forces across Europe have different ways of investigating previously undiscovered graves and excavating human remains. By bringing in experts from different fields, such as forensic archaeologists and geophysicists and on the ground police CSIs, we can all learn from each other and better understand the respective roles.

“We’ve used a variety of techniques during our investigations, from equipment that costs tens thousands of pounds to a simple trowel and all have a part to play in setting high standards of best practice, which is essential when you consider what’s at stake.”

During the exercises the teams unearthed several mock skeletons and examined the burial pits, the skeleton, clothing and DNA samples.

Alison Baldry a CSI from Lancashire Constabulary, said: “This is a rare opportunity for experts from different forensic fields and countries to share working practice in a human remains search and recovery scenario.”

Zoe Taylor, a Scene Examiner from Police Scotland, said: “It’s a wonderful opportunity to work with other CSIs, geophysicists, archaeologists and other forensic recovery experts from all over Europe. It’s a great learning experience and gives us the chance to get hands on in this type of clandestine grave recovery process.”

The exercise was organised by UCLan and the Netherlands Forensic Institute in conjunction with ENFSI (European Network of Forensic Science Institutes) and EMFA (European Meeting for Forensic Archaeology). In total, 29 delegates from nine European police forces and forensic science companies, including six from Lancashire Constabulary, took part in the event, alongside UCLan’s MSc Forensic Anthropology students.

Staff from the Netherlands Forensic Institute, Queens University Belfast and the American University of Rome also helped to run the event. View images from the exercise on the UCLan Flickr gallery. 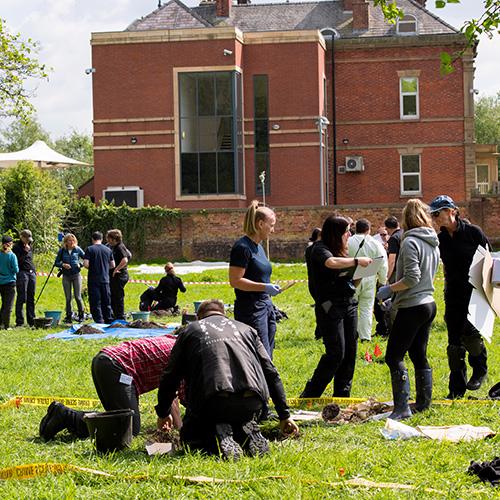