Rochdale student speaks out about rare condition through her art

A Rochdale student is using her final year art work to raise awareness of a rare genetic condition she suffers from called Weaver’s Syndrome.

University of Central Lancashire (UCLan) fine art student Bethany Banks was diagnosed with the condition, which causes rapid growth and mild intellectual disabilities, when she was 19-years-old.  The 6ft 5in artist, who at school was often called “giant”, said that being diagnosed with Weaver’s Syndrome challenged her identity and her art work has helped her to come to terms with it.

The 24-year-old commented: “I spent 19 years just being me and then suddenly I felt like I had a new identity.  My final piece is a 12ft 10in long dress, double my height, which I made with the image of a fairy tale giant in mind.  It’s very personal as the colours in the dress represent the emotional mood swings I have because of the disorder and I’ve also embroidered lyrics from some of my favourite artists, such as Fleetwood Mac, into it because writing has also helped me to come to terms with having Weaver’s Syndrome.  I’ve essentially opened up my heart in making this dress.”

"I hope through my final year piece that I can raise awareness of what is a very rare condition and remove any stigma or assumption."

Bethany, who studied at Oulder Hill School and Hopwood Hall College before coming to university in Preston, said the friends she has made from the fine art course have also helped her talk more openly about the condition.

She added: “It was during my second year that I felt ready to speak out and share my story.  I’ve made some great friends over the last few years who have helped me to come to terms with having Weaver’s Syndrome and feel comfortable in my own skin.  I hope through my final year piece that I can raise awareness of what is a very rare condition and remove any stigma or assumption.”

Bethany now plans to build on the business she set up with mum Andrea in 2012 called ‘So Northern Creative Art Studios’, which sells art work and runs craft workshops in and around Rochdale.

Her dress will be on display at UCLan’s Preston Campus from 9-16 June as part of the Lancashire Arts Festival Degree Show. 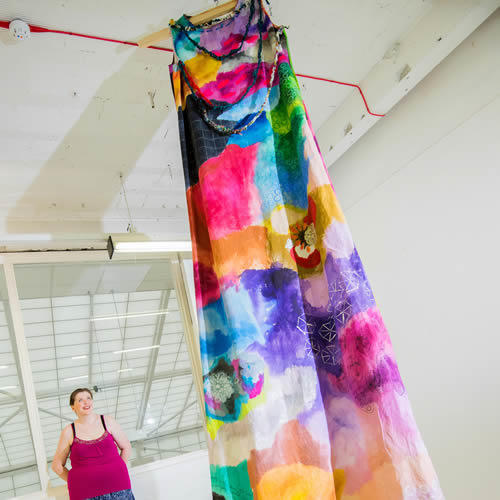