Fifty-four years after the original BBC television broadcast, BBC Studios will premiere a new production of

Mission to the Unknown, a missing Doctor Who episode that has been faithfully recreated by a team of students, graduates and staff of the University of Central Lancashire (UCLan).

Mission to the Unknown will be premiered on the Doctor Who YouTube channel at exactly 5.50pm BST on 9 October to mark the anniversary of the original broadcast of the episode, which was first aired on BBC One in 1965.

The episode will be followed by a making-of documentary short created by YouTuber Josh Snares featuring the cast and crew of Mission to the Unknown with voice of the Daleks, Nicholas Briggs, original cast member Edward de Souza and the classic Doctor Who companion Peter Purves (Steven Taylor) who played the companion to the First Doctor in the 1960s

Luke Spillane, Digital Publishing Manager for Doctor Who at BBC Studios, said: “I’m delighted that we will be bringing the story of Space Security agent Marc Cory to our 1.3 million subscribers on the Doctor Who YouTube channel as it is such a fantastic recreation, made lovingly with real craft and expertise by everyone at the University of Central Lancashire. I hope audiences around the world can imagine that it’s tea time on 9 October 1965 as they rather excitingly watch a black and white episode of Doctor Who premiere on their television sets, mobile phones and tablets.”

"The project gave so many people great experiences, and it is wonderful to see the Daleks menacing a black and white jungle once more."

The project was master-minded by Andrew Ireland, Pro-Vice Chancellor of Digital and Creative Industries at the University, and brought together a dedicated group of students from a wide range of disciplines including film and television, acting, fashion, music, design and dance to recreate the episode from the original script as authentically as possible, carefully researching and reproducing as faithfully as possible the original 1960s production techniques to re-create the classic look of the series.

Andrew Ireland, Pro-Vice Chancellor of Digital and Creative Industries at the University of Central Lancashire, said: “It is such a loss to our cultural heritage that so many episodes of 1960s Doctor Who are missing from the BBC archives. This project presented us with an exciting opportunity to address that, to explore a new way of bringing these missing slices of TV history to life, and in the process, help students learn their craft by comparing contemporary production methods with historical approaches. The project gave so many people great experiences, and it is wonderful to see the Daleks menacing a black and white jungle once more.”

The recreation caught the imagination of several Doctor Who luminaries including Nicholas Briggs, who has provided the Dalek voices for the recreated episode, and stars including Peter Purves, who played 1960s companion Steven Taylor, and Edward de Souza, who played Marc Cory in the original episode, visiting the new set to lend their support. 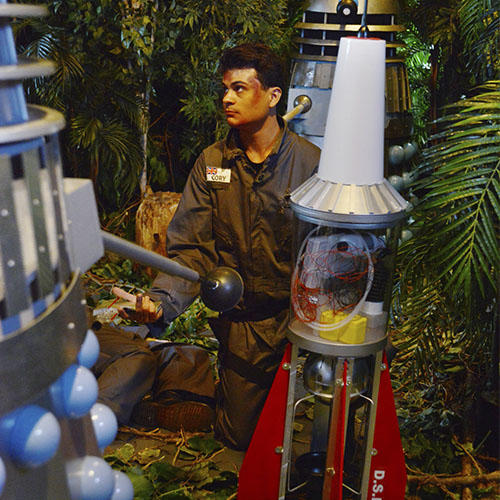 Mission to the Unknown