Generous Prestonians have been praised after hundreds of shoeboxes, containing gifts for children displaced by a hurricane, arrived at the reconstructed Caribbean island of Sint Maarten.

A year on from Hurricane Irma, which led to the University of Central Lancashire (UCLan) hosting nearly 650 American University of  the Caribbean School of Medicine (AUC) students and staff in Preston, UCLan has received news that conditions for the islanders are much improved.

Golden Jackson, AUC’s Assistant Dean for Service-Learning and Community Affairs, said in a letter to the University that the AUC students and staff were finally back on the island and one of their first tasks was to coordinate the delivery of the 210 shoeboxes.

She said: “One of the enjoyable activities of the past weeks was sorting and delivering the shoeboxes sent by the generous people of Preston. After the boxes arrived, the first task was to sort by age and gender so we could more easily package for distribution. Beneficiaries of the gifts included two of the island’s foster homes, ‘I Can’ and ‘New Start’.”

Golden continued: “At New Start, three young boys helped me carry the boxes up a very steep and rocky path. At I Can, children appeared in small groups, individually receiving a box with their name on it. The next delivery was to the Little League Player Development Programme, an amazing afterschool programme that provides care and lots of creative approaches to learning that make a huge difference in the lives of the children who attend. Our final deliveries were to two public elementary schools that had responded to our initial inquiry months ago. The school leaders were thrilled to get the boxes.

"One of the enjoyable activities of the past weeks was sorting and delivering the shoeboxes sent by the generous people of Preston."

“All our deliveries were met with smiles and thank yous and great interest as I explained about our moving to Preston, England, so our students could continue their studies and the kindness and concern of the people of Preston and of the wonderful friends we found as we worked at UCLan.”

Golden added: “Thank you is not adequate – we deeply appreciate your hospitality and openness in welcoming us, your attention to so many details around our schedules and exams, and your assistance in finding ways for students to join in community engagement and to participate in many interesting and enjoyable events.”

The University’s efforts to relocate and house the students and staff in the city in just nine days has been recognised at a national level. UCLan has collected international category awards at The Guardian University Awards 2018 and Educate North Awards 2018 while it has been shortlisted for a Times Higher Education Award.

Michael Ahern, UCLan’s Chief Operating Officer, said: “It was a phenomenal achievement, not only from our wonderful staff who made it happen in just nine days but also the AUC representatives and East Lancashire Hospitals NHS Trust. The way the city and the local community came together was also something to be very proud of. Businesses in Preston received a financial boost from the influx of students while AUC students were happy to lend their support to volunteering projects.”

UCLan and AUC are currently working together to develop the partnership. 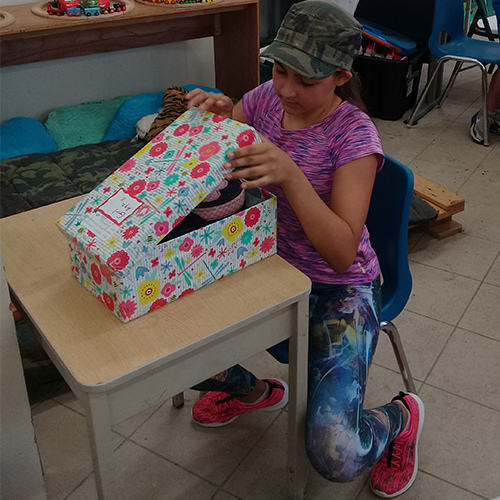 The shoebox gifts were gratefully received