City centre community joins together to back ‘Ask for Angela’ initiative

All Preston city centre pubs, bars and clubs have joined up with the University of Central Lancashire’s (UCLan) outlets to promote a safety in the city initiative.

The ‘Ask for Angela’ scheme, which operates nationally, encourages anyone who may feel uncomfortable, unsafe or vulnerable while out in the city centre to ‘Ask for Angela’.

Those situations could range from people meeting in person for the first time, predominantly, after making contact through online dating websites and apps; feeling unsafe due to excessive alcohol consumption or concerned about being followed while walking through the city centre.

If people do not feel comfortable or have received unwelcome advances, they can approach a member of staff at one of the 52 establishments and ask if ‘Angela’ is in.

Trained staff will then take them into to a safe area where they can explain their issue and get a taxi, friend or family member to pick them up. The employee can then tell the other person to leave or call police if they believe a criminal offence has occurred.

The initiative has been brought to the city through a partnership between UCLan, Lancashire Constabulary, Preston BID – which runs the city’s Pubwatch group, and City Safe.

"Student and staff safety is paramount to ensuring the UCLan community enjoys the great experiences on offer in Preston."

Jen Coll, Preston Licensing and Neighbourhood PCSO at Lancashire Constabulary, said: “Our implementation of this idea comes after a successful pilot by the Safer Communities Sexual Violence and Abuse Partnership in Lincolnshire. We hope that this scheme will give people the confidence to know that if something goes wrong on their date or if they are in a position where they feel unsafe, they can tell someone and get home safely.”

Lisa Banks, UCLan’s Director of Student Services, commented: “Student and staff safety is paramount to ensuring the UCLan community enjoys the great experiences on offer in Preston. To know anyone can ‘Ask for Angela’ in any pub, bar or club on route from the Campus, along Friargate and into the city centre is an added security measure that we’re delighted to support.”

Mark Whittle, of Preston BID, added: “Preston is an award-winning night time destination with a strong reputation as a safe and welcoming place. ‘Ask for Angela’ is a new joint scheme to further build this reputation. It helps provide individuals with extra reassurance when choosing to socialise in our city centre.” 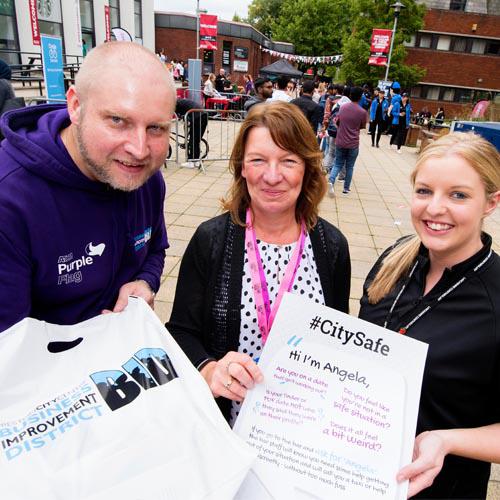