A slim majority of Lancastrians have confirmed they will vote to remain in the European Union (EU) at a public debate hosted by the University of Central Lancashire (UCLan).

More than 500 local people attended the debate on the UK’s future in the EU with many of the unsure voters swaying towards the leave camp, although the overall majority said they wanted to remain in the Union.

UCLan Vice-Chancellor Professor Mike Thomas and Mark Hendrick, MP for Preston, voiced their opinions for the UK to remain in the EU while John Bickley, UKIP Party Treasurer, and Dr Mark Baimbridge, Senior Economics Lecturer at the University of Bradford, spoke about the benefits of withdrawing and returning to being an independent nation. The event was chaired by broadcaster and UCLan Board Member Fiona Armstrong.

"The anti-Europeans and xenophobes who say Europe is a threat totally disregard the decades of successful membership which has contributed into making Britain into the world’s fifth largest economy."

Preston MP Mark Hendrick said that the EU membership “should be treasured and valued.” He added: “The anti-Europeans and xenophobes who say Europe is a threat totally disregard the decades of successful membership which has contributed into making Britain into the world’s fifth largest economy. Yes we could “survive” outside the European Union, yes we could “manage” outside the European Union, but at what price? The benefits of being a member of the largest single market in the world has costs and that’s why we pay contributions for membership as you would by joining any club.”

He said: “The UK has a trade deficit with the EU but a trade surplus with the rest of the world. If we leave the rest of the EU won’t simply stop trading with us, there’s a reason they call us Treasure Island.”

“If we leave we have to think about how we develop new trade relationships with the EU. We could stay very close and still be part of the Single Internal Market, which would be very similar to where we are now, or we could be more radical and consider opening up a free trade agreement with the EU which would open up opportunities to establish other free trade agreements with other parts of the world.” 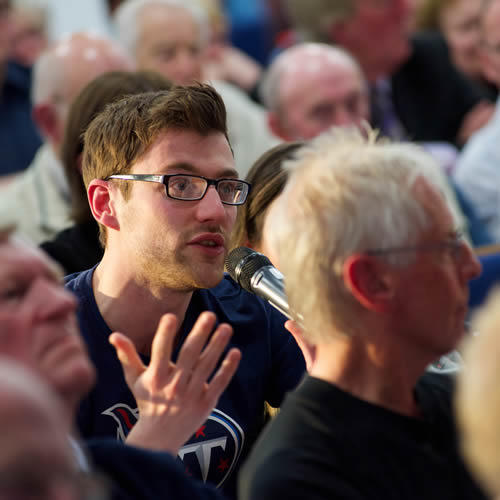 "In my view, and in the collective view of the vast majority of universities, EU membership is essential if we are to compete in the future global knowledge economy."

Professor Mike Thomas, who represented the university sector at the debate, commented: “Alongside over 100 other University leaders I am a wholehearted supporter of the ‘in’ campaign with regards to EU membership. In my view, and in the collective view of the vast majority of universities, EU membership is essential if we are to compete in the future global knowledge economy. For instance, EU students spent £2.27 billion in the UK, creating 19,000. In short, what’s good for universities is good for business.”

Representing UKIP and responding to a question on how leaving would affect the North West’s defence industry, no campaigner John Bickley said: “Nothing significant would happen. BAE’s biggest contracts are outside of the EU in the Middle East. We live in a globalised economy and should have no fear when we have the skills and business acumen to trade with the rest of the world.”

Nursing student Sam Charlton said his strong feelings toward protecting the NHS meant he was firmly in the remain camp. “The NHS is protected in the EU as are workers’ rights. I don’t believe that the money we give to the EU would be ploughed into saving our NHS if we left it would end up in the bankers’ pockets.”

Gary Church from Lostock Hall commented: “I thought it was very interesting. For me the leave campaign edged it. I thought the stay campaign arguments was a bit scripted and not as passionate. I think we should leave, the debate tonight didn’t change my opinion.”

Donald Thomas from Fulwood said: “From all the information I’ve had, from watching television and listening to politicians, the economic case to stay or leave is going to be highly marginal.

“This was confirmed to me tonight. One thing I firmly believe is that change, and the resulting legislation, costs money and therefore if there is no clear economic case, one way or the other, then why spend the money? Keep what you’ve got.”

View photographs from the event on UCLan’s Flickr gallery and watch the video here.