Scientists today announced that South Africa’s Rising Star cave system has revealed yet more important discoveries, only a year and a half after it was the new hominin species named ‘Homo naledi’ was uncovered at the site.

Reporting in the open access journal eLife, The University of Central Lancashire’s (UCLan) Dr Patrick Randolph-Quinney is part of an international team of scientists announcing the discovery of a second chamber within the Rising Star cave system, the richest fossil hominin site in Africa, containing more remains of Homo naledi.  The chamber, named Lesedi Chamber, is more than a hundred meters from the Dinaledi Chamber where the original Homo naledi was found.

The new discovery of the second Lesedi chamber with abundant Homo naledi fossils includes one of the most complete skeletons of a hominin ever discovered, as well as the remains of at least one child and another adult. The discovery of the Lesedi Chamber has led the team to argue that there is more support for the controversial hypothesis that Homo naledi deliberately disposed of its dead in remote, hard to reach caverns.

The structure of the chamber where Homo naledi was originally found was such that the fossil chamber was only accessible by a near-vertical chute and crawls so narrow that only very small and slender individuals could access it. Due to the confines of the chamber the Rising Star team applied forensic recovery, and the latest 3D scanning and analytical techniques in order to extract the maximum amount of information about the formation of the assemblage, how the bodies had decomposed and skeletonised, and ultimately what introduced the bodies into the Dinaledi Chamber.

"Since the discovery of the fossils in 2013, the Rising Star Project has brought together researchers from 35 institutions in Africa, the US, Europe and Australia, in an incredibly open collaborative project."

Dr Patrick Randolph-Quinney, Senior Lecturer in Biological and Forensic Anthropology at Central Lancashire, has been part of Rising Star project from the start. As a forensic anthropologist and taphonomist he developed the excavation and body recovery protocols in line with forensic best practice, supervised 3D cave scanning and spatial analysis projects, and undertook analyses of weathering, skeletal damage patterns and other post-mortem processes in the deposition and formation of the assemblage when the fossils had been excavated.

He commented: “This has been an incredibly exciting project to work on. Since the discovery of the fossils in 2013, the Rising Star Project has brought together researchers from 35 institutions in Africa, the US, Europe and Australia, in an incredibly open collaborative project.

“My part has been to study the processes affecting these bones following death, and from that how they may have got into the cave system, how the cave environment influenced them, and what this can tell us about the behaviour of Homo naledi. The study of these processes is called taphonomy, or post-mortem (death) science, and UCLan has been at the forefront of the post-mortem sciences for a number of years through research and forensic casework. Now we are applying forensic science and taphonomy back into the deep past.”

So far, the scientists have uncovered more than 130 hominin specimens from the Lesedi Chamber. The bones belong to at least three individuals, but the researchers believe that there are more fossils yet to be discovered. Among the individuals are the skeletal remains of two adults and at least one child. The child is represented by bones of the head and body and would likely have been under five years of age. Of the two adults, one is represented by only a jaw and leg elements, but the other is represented by a partial skeleton, including a mostly complete skull.

The specimens from the Lesedi Chamber are nearly identical in every way to those from the Dinaledi Chamber, a remarkable finding in and of itself. “There is no doubt that they belong to the same species,” said John Hawks of the University of Wisconsin-Madison and Wits University, an author on the three related papers published in eLife.

The age of the original Homo naledi remains from the Dinaledi Chamber has been revealed to be startlingly young in age. Homo naledi, which was first announced in September 2015, was alive sometime between 335 and 236 thousand years ago. This places this population of primitive small-brained hominins at a time and place that it is likely they lived alongside Homo sapiens. This is the first time that it has been demonstrated that another species of hominin survived alongside the first humans in Africa.

The Rising Star team adopted a multidisciplinary framework to recover the fossils, bringing a wide range of expertise in buried environments (more often applied to clandestine burials or forensic mass graves) to ensure that the most complete range of evidence was collected.

“Analysing the context of Homo naledi is rather like working on a forensic case” said Dr Randolph-Quinney. “In casework we carefully recover, evaluate and present evidence. In the case of Homo naledi, when we combine studies of the geology and sedimentology, with taphonomic evidence from the bones, then we have a unique signature for a South African hominin site.” 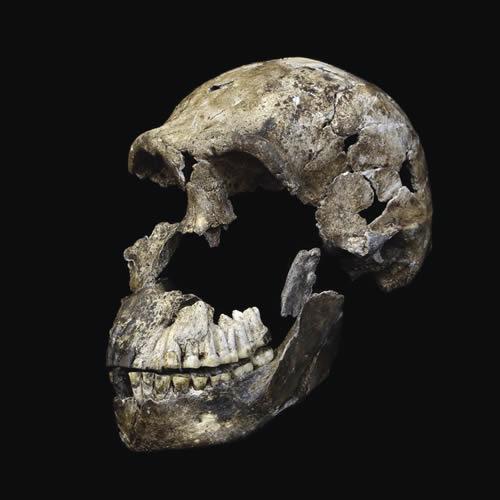 Scientists have uncovered over 130 hominin specimens

"In the case of Homo naledi, when we combine studies of the geology and sedimentology, with taphonomic evidence from the bones, then we have a unique signature for a South African hominin site."

“The fossil assemblage is unique by what it does not evidence” he added. “Rising Star presents no fossils other than those of Homo naledi, no evidence of breakage or trauma around death, no carnivore puncture marks or gnawing, no cut marks, no weathering, no evidence of water transportation, and no evidence of burning. The assemblage was not carried in by carnivores, transported by water, was not exposed on the surface before being brought into the cave, and shows no evidence of having fallen into a death trap. We have none of the usual suspects involved in bringing our fossils deep into the cave as are found at other South African cave sites.”

Instead, what the researchers argue is that the geology and sedimentology of the cave, the spatial context and distribution of bones, and taphonomic signatures have demonstrated evidence for ritualistic complex behaviour – specifically the deliberate disposal of the dead, a feature that researchers traditionally associate with much larger brained, more modern looking hominins.

‘New fossil remains of Homo naledi from the Lesedi Chamber, South Africa’ is one of a series of papers published today dealing with the evolutionary context and age of the hominin species Homo naledi from Rising Star Cave.

The original fossils of these new discoveries, as well as those from the original Rising Star Expedition will be put on public display at the Maropeng Visitors Centre, Cradle of Humankind World Heritage Site, Gauteng South Africa from May 25th 2017. The exhibit will be the largest display of original fossil hominin material in history. The new discovery and research was done by a large team of researchers from UCLan, University of the Witwatersrand (Wits), James Cook University, Australia, the University of Wisconsin, Madison, United States, and more than 30 additional international institutions.