Organised by the UCLan Creative Communities Group (CCGUK), visitors from across the community joined University staff and students on campus to dance, sing and stand together to demand an end to violence against women and girls alongside people from more than 200 other countries in one of the biggest mass action events in human history.

One Billion Rising invites people from all over the world to gather safely in places where they are entitled to justice such as court houses, police stations, government offices, school administration buildings and places of worship. The Preston event was supported Julie Ward and Malaysian TV Personality Lakshmi Appadorai Baker who is also a former Miss India, producer, scriptwriter, host and singer. Lakshmi has a personal experience of abuse that she openly shares with other women in a show of solidarity. Dance instructor and World Salsa Dance Champion Phil Kaila and Salsa Northwest led the routine accompanied by live music.

"We were delighted by the number of people who turned up to take part in this global dance event to highlight the shocking global statistic of one billion and rising violent attacks against women."

Russell Hogarth, UCLan Honorary Fellow and co-founder and chair of the UCLan CCGUK, said: “It was a fabulous event and I want to thank everyone who took part for their support. We were delighted by the number of people who turned up to take part in this global dance event to highlight the shocking global statistic of one billion and rising violent attacks against women.”

The One Billion Rising campaign began in Preston on Valentine’s Day in 2012. The annual event has grown bigger each year as people come together to express their outrage, dance and rise up in defiance of the injustices women suffer every day.

Julie Ward, who is an active campaigner for equal rights and social justice, commented: “I would like to thank Russell for bringing the One Billion Rising event to the city of Preston again for the third year in a row. I was delighted to see the event back on the UCLan campus again supported by University staff, students, honorary fellows and many community members.

“Violence against women and girls is an intolerable scourge in our modern day society. One in three women across Europe are victims of violence - domestic abuse, sexual violence, female genital mutilation, emotional abuse and, increasingly, online abuse. We must stand together as women of the world, together with men and boys, to challenge the culture that allows violence to prevail. By dancing as part of a mass global action the people of Preston are sending a positive message of solidarity to women and girls everywhere, and to governments who must take action.” 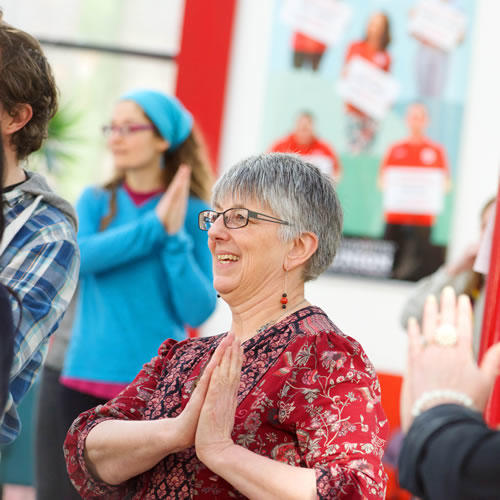 This year, CCGUK UCLan hosted an even bigger event by teaming up with other CCG members in Nigeria, South Africa and London who organised and filmed a series of dance events in local businesses, universities, schools and colleges. The event was filmed by local media company PR1 Media supported by UCLan students and graduates.

See more photos from the event on our Flickr Gallery.