In the category 'Most Effective Use of Social Media' at the Heist Awards for Education Marketing, the University won a Bronze Award for the National Student Survey (NSS) Campaign - Mannequin Challenge 2017.

The concept behind the Mannequin Challenge involved weaving moments of the learners’ journey, from the excitement and anticipation of their ‘first day’ through to the success and celebration of graduation, using different campus locations, all featuring frozen motion. Key messages of the NSS campaign were communicated through large speech bubbles suspended between people to emphasise the importance of completing the NSS Survey and to encourage students to use their ‘voice’.

The whole project was created by and featured UCLan students and staff from the School of Journalism, Media and Performance who filmed, acted, directed and produced the video right down to the accompanying soundtrack composed by music production students.

Commenting on the University’s entry the judges said: ''The University of Central Lancashire created an exceptional video that helps make this a stand out entry. Although the video is based on a worldwide craze, there is something brilliantly original about the stitching together of the student journey in this way.''

"The University of Central Lancashire created an exceptional video that helps make this a stand out entry."

For Sam Green, who has just graduated with a first-class honours from the BA (Hons) TV Production, the award was a perfect ending to his time at the University. “The ‘mannequin challenge’ video was a brilliant project on which to work, particularly as the impact was so great. It really helped students to understand the importance of engaging with the National Student Survey,” he said.

Once uploaded to the University’s social media channels the video was viewed over 120,000 times on Facebook with reactions, comments and shares totalled nearly 9,000.

Executive Dean of the College of Culture and the Creative Industries Dr Andrew Ireland said: “It was a great piece of work which tapped into a national trend. To gain industry recognition of this nature is just reward for all the hard work put in by students and staff who worked so hard to pull the whole thing off.

“The inclusive family spirit that overarches learning, sharing knowledge, working together and ‘belonging’ has been captured in the very style chosen by the students themselves – one that visualises and encapsulates the joy of learning.

“Importantly the project helped us to increase the amount of final year students completing the NSS by over 13 percent which is a fantastic result.”

Watch the Graduation section of the Mannequin Challenge and view the full video here. 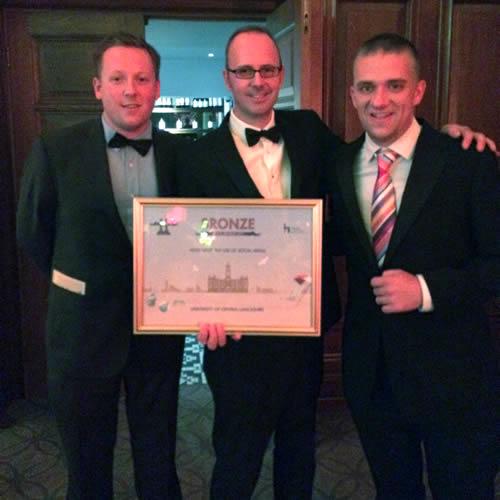