A master’s student from the University of Central Lancashire (UCLan) has written her name into the history books.

Lauren Fitton, a MA Children’s Book Illustration student, has become the first student to be commended for the Macmillan Prize for Illustration twice in a single year.

The two picture books, which have been highly commended by the judges, are both non-fiction about wildlife, firstly with Every Whale, which follows a family of whales, and an illustration of several species in A Natural Order.

The 23-year-old, from Davyhulme in Greater Manchester, said: “I wasn’t expecting it at all because one of my books was only half finished, and the other was a non-fiction book which rarely does well in the Pan Macmillan competition. I was shocked but so happy to have been highly commended for both."

"My favourite piece is probably A Natural Order. It was a big challenge for me as I had to collect all of the data for each of the 50 animals, arrange them in a certain order, and then draw them in a way that would flow throughout the book."

It is the second year in a row that Lauren’s name has been put forward for the award.

The former Urmston Grammar School pupil has spent the past five years studying at UCLan. She gained a First Class degree in illustration before continuing on to the master’s course.

Lauren said: “During my five years at UCLan, I’ve learnt a lot and met some really amazing people. I went to London for the Design and Art Direction show and then travelled with the MA course for the Bologna Children’s Book Fair and they were both really fun and inspirational.

“The University played a massive role in my development. If I compare the work I was doing when I started the course to when I finished, there is a clear improvement in all areas and I believe that this is mainly due to the input of the tutors.

“Once I found a method of working which suited me, the master’s course helped me to develop it further and explore the different paths which my work could take.”

Lauren hopes this success will help her career as a freelance illustrator. She continued: “Children’s book illustration was what originally sparked my interest in illustration as a whole and that spark never went away.

“With other areas of illustration, you often draw that subject once and you’re done. Whereas with children’s book illustration, you can really explore a character or location and tell a story through a sequence of drawings." 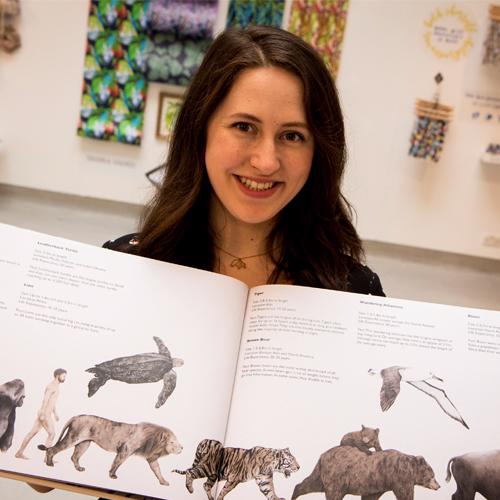 Lauren Fitton, with one of her books

"Being a freelance illustrator has always been a goal of mine as I’d love to work on projects every week. I’d also love to be able to continue making children’s books and I hope to have one published one day."

Steve Wilkin has been hugely involved in Lauren’s development, having been one of her tutors throughout her time at UCLan.

He said: “Having taught Lauren on both the undergraduate and Master’s course I am always amazed at how hard working and talented she is. She is undoubtedly one of the best figurative draughtswomen the illustration course has produced.

“To be commended in the Macmillan Prize for Illustration is in itself quite an achievement but to be highly commended three times for three books in two years is an outstanding achievement and I look forward, hopefully, to seeing Lauren's books in the shops in the not too distant future like many of our former graduates.

“I am also looking forward to seeing Lauren's work in her postgraduate show in October 2018 when all three books will be on show. She is a force of nature, which is no bad thing for natural history illustrator!”

Lauren’s work will be exhibited at Coningsby Gallery, in London, on Tuesday 19 June.