The first Preston Soup, coordinated by staff from the University of Central Lancashire (UCLan) in partnership with other community organisations, has been hailed a success after a healthy eating and wellbeing project for people with mental health needs was declared the first winner of the new local crowd-funding project.

The Walton’s Parade Garden project from Progress Housing Group was one of three to pitch at the event which invites attendees to make a small donation in return for a bowl of soup and bread and a chance to vote on a community initiative they believe will benefit the city the most. More than 50 people attended the first event which raised £200.

Staff from Progress Housing Group are working with the residents of the supported living scheme, who have enduring mental health needs and have recently been discharged from hospital or have left the prison system, to build a community garden and vegetable patch. Feedback so far suggests that it has been successful in encouraging the tenants to be more active and giving them a sense of achievement.

"The funding is going to really help us develop the project further this year and we will be inviting the wider community of Preston to come along and meet the residents taking part."

Andrea Richardson, Community Involvement Manager from Progress Housing Group, and Walton’s Parade resident James came to pitch at the event. Andrea commented: “It was a pleasure to be invited to pitch for funding for the Walton’s Parade Garden project at the first ever Preston Soup event.

“The funding is going to really help us develop the project further this year and we will be inviting the wider community of Preston to come along and meet the residents taking part. We will also be offering free mental health awareness training to local communities to try and break down the barriers and dispel some of myths surrounding it.”

James said: “It was a great experience and I can’t believe we won. It was a really good boost to my confidence and I really enjoyed meeting new people from my local community.”

UCLan is working with its own Creative Communities Group and Media Innovation Studio as well as community supporters from groups such as The Creative Network and The Larder to run Preston Soup, which aims to follow in the footsteps of the successful Detroit Soup in the US that has so far raised more than £63,000 over the last six years.

UCLan Enterprise Manager Sally Bate is one of the Soup’s organisers. She said: “Our launch event was a big success and we received a lot of support that we can now build on. All of the pitches were from very worthy causes and we are already looking forward to hearing from Andrea and the Walton’s Parade Garden project team to see how the funds from our first Preston Soup have made a difference.” 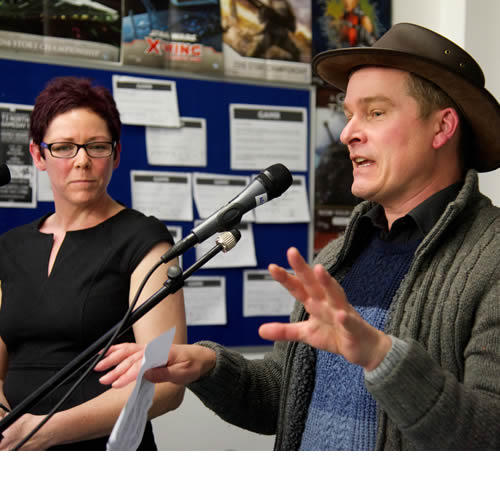 "Our launch event was a big success and we received a lot of support that we can now build on. All of the pitches were from very worthy causes."

The two other projects were Preston Food Champions and the Man Cave Project. The Food Champions initiative, presented by Anne Kingston, encourages people to eat healthier and buy locally sourced produce and Haley Fockse’s Man Cave Project is a support group that brings men together to discuss personal and societal issues.

The next Preston Soup will take place on the 8 June at Dice and Donuts Cafe. Any community groups who would like to join the planning group or find out how to apply to present can get in touch by calling 01772 894769 or emailing. People can also follow the initiative on Twitter @Preston_Soup and finding PrestonSoup on Facebook.

The Preston Soup launch was hosted by Dice and Donuts Café which sits opposite Preston Railway Station. The vegetables for the homemade soup were supplied by Fare Share at Recycling Lives, it was made on campus at UCLan and the bread came from Morrisons. All food and labour were provided free of charge to show support for the event.

See photos from the Preston Soup launch on our Flickr Gallery.

The people involved in setting up Preston Soup are –