The University of Central Lancashire (UCLan) has been presented with a plaque dedicated to Joseph Livesey, the man who co-founded the institution that eventually became the University as we know it today.

Joseph Livesey, who was the founder of the Temperance Movement, was heavily involved in the founding of UCLan or, as it was known in 1828, the Institute for the Diffusion of Knowledge.  The plaque, presented to the University in its 190th anniversary year, originally had pride of place on the wall of Mather Brothers Printers in Preston and will now sit in UCLan’s Special Collection archive, which also houses other Temperance Movement artefacts.

"Joseph Livesey was instrumental in the establishment of the Institute for the Diffusion of Knowledge in 1828, which of course many years later became the University of Central Lancashire."

Born and bred in the area, the former Walton-le-Dale resident’s commemoration was sculpted by William Norris Simm during the early 1930s for the Seven Men of Preston centenary.  People today will best associate the Livesey name with the University building named after him on Heatley Street, close to the city centre.

Director of Learning and Information Services at UCLan James Crooks said: “Here at the University we are passionate about the history of Preston and the University. As well as being such a prominent Temperance campaigner, Joseph Livesey was instrumental in the establishment of the Institute for the Diffusion of Knowledge in 1828, which of course many years later became the University of Central Lancashire.

“We are therefore delighted to receive this commemorative plaque, and are extremely grateful to John Banks and Andrew and Simon Mather for donating it to the University. This is a fantastic way to mark the beginning of the University’s 190th anniversary celebrations, and the plaque is a very welcome addition to the University Library’s Special Collection.” 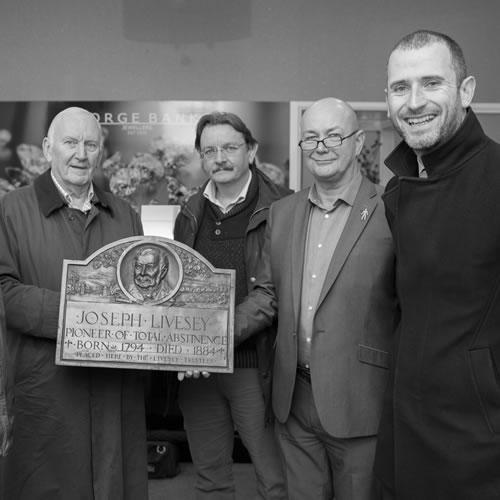