The University of Central Lancashire (UCLan) has brought a taste of the Far East to Preston after welcoming a special guest from the Japanese Embassy to campus for a celebratory event.

The First Secretary for Education and Sport from the Japanese Embassy, Hiroshi Itakura, came to UCLan for a Japanese cultural festival known as The Second Nihon Bunkasai 2016 to celebrate the University’s vibrant Japanese language and culture community.

Students shared their academic achievements, language skills and knowledge of Japanese culture with Mr Itakura by holding an exhibition with information on the studying abroad programme, Kabuki face painting, performing a play in Japanese, sharing the history of Japanese Pop, mask art and more. Mr Itakura also gave a talk to students on how his country is coping with an increasingly ageing population. He was then treated to a traditional Sōran-bushi performance by the UCLan Japanese Society, J-Soc; one of the Students’ Union’s largest student societies formed mainly by students of Japanese which is the University’s most studied language at degree level.

"It was a pleasure to meet a lot of UCLan students who are enthusiastic in learning about Japan."

Mr Itakura commented: “It was a pleasure to meet a lot of UCLan students who are enthusiastic in learning about Japan and I thank the people of UCLan for their very warm hospitality at such a wonderful event. Not only it was very nice to share with students' experience of studying in Japan, but I was also very impressed that so many students are keen to learn about Japan and are enjoying Japanese culture.”

UCLan J-Soc President Hanna Shinagawa accompanied Mr Itakura on his tour. She said: “It’s an honour to have such a distinguished guest on campus. We have a really enthusiastic and hardworking community of students interested in Japan and all of the students involved in today’s event are really excited to show off their cultural knowledge and language skills.” 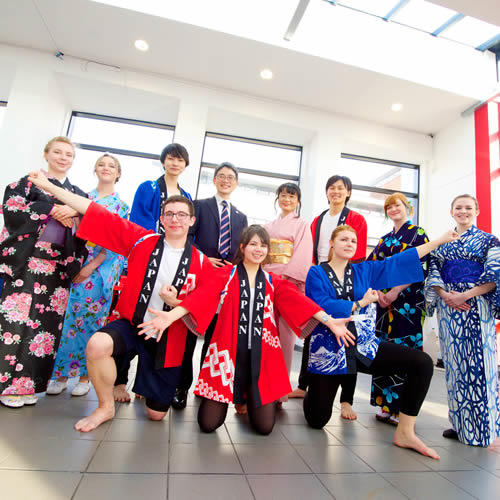 "We are very unique because our Japanese provision keeps on growing and we have over 200 students learning Japanese at degree level. We exchange many students with Japanese universities every year and our contribution has been recognised by the Embassy."

The Director of UCLan’s East Asia Exchange and Senior Lecturer in Japanese, Takako Amano, led the students in organising the event. She said: “We are delighted to welcome Mr Itakura to Preston. This is the second time UCLan has hosted a formal visit from the Japanese Embassy to our cultural festival. We are very unique because our Japanese provision keeps on growing and we have over 200 students learning Japanese at degree level. We exchange many students with Japanese universities every year and our contribution has been recognised by the Embassy.

“The students have gone above and beyond to really show their love and knowledge for a country that we hope to maintain and strengthen our links with.”

The Japan Bunkasai 2016 was organised by UCLan J-Soc, Japanese language students, graduates and Japanese teaching staff and funded by the Student Experience Fund through the School of Journalism, Language and Communication.

View images from the event on our UCLan Flickr Gallery.