High street drones could save lives of Cambodia’s armed forces

The Royal Cambodian Armed Forces (RCAF) are to use high street drones for mine clearance and peace keeping operations in Cambodia and during United Nations missions around the world, following training from the University of Central Lancashire (UCLan).

This is the first time that the RCAF has been provided with this technology to help with Cambodia’s significant problems with landmines, which follows decades of war. The Cambodian Mine Action Centre (CMAC) estimates that there could be as many as four to six million mines and other pieces of unexploded ordinance in Cambodia.

According to the Mines Advisory Group (MAG), the most commonly used method of mine detection across the world is manual detection and disarmament, which is often slow, expensive and dangerous. Using these drones, the RCAF will now be able to map out terrain that could potentially contain mines and identify suspicious items or roadside devices without putting lives at risk by having to physically enter those spaces.

Both practical and classroom-based training for the quadcopter drones was provided by researchers from UCLan, the Furniture for Education Worldwide (FEW) charity and UNITE the Union, and was supported by UK-based photographer and commercial drone pilot, Dave Severns-Jones.

"This is certainly one of the very first uses by the RCAF of off-the-shelf high street drones for this type of operation. It’s a simple tool but it will go a long way towards increasing the safety of Cambodia’s armed forces."

Over three days, the RCAF students were taught about practical flying, air law, how to conduct flights safely, understanding the weather and practical drone maintenance.

Dr. Darren Ansell, space and aerospace lead at UCLan and one of the leading trainers involved in the project, said: “It’s surprising that the use of drones to support mine clearance operations is not more common now that the technology is readily available, particularly in countries like Cambodia which is one of the most heavily mined areas in the world.

“This is certainly one of the very first uses by the RCAF of off-the-shelf high street drones for this type of operation. It’s a simple tool but it will go a long way towards increasing the safety of Cambodia’s armed forces when they’re surveying dangerous spaces or suspicious objects, and will ultimately save lives.”

“Mines are still a very large problem, not just in Cambodia, but around the world, and this technology will help us to address this problem while minimising risk to the teams involved. Two drones are already flying regularly to produce maps and conduct air surveillance around the barracks and along roads in the Central Africa Republic as part of a United Nations mission.” 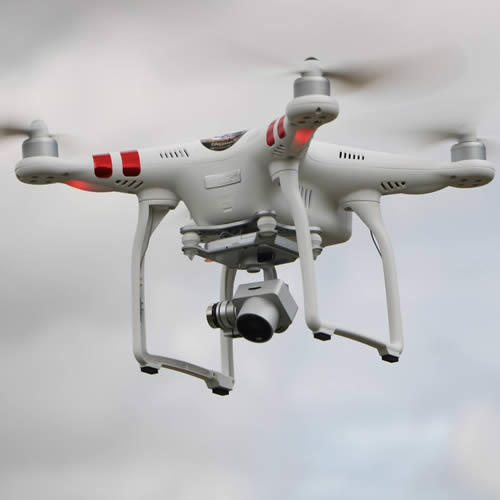 A DJI quadcopter drone in use for training