A Preston footballing legend has been honoured by his local University.

The long-time Preston resident, who played for and managed Preston North End, was recognised for the significant contribution he has made as a football manager and player.

David made 172 appearances and scored 19 goals during his time as a centre half at Deepdale. He took over the managerial reins in 1998 and led the team from the lower half of Division Two to within touching distance of the Premier League in 2001.

He said: “I’m really honoured and feel very privileged, not only for me but for my family too, to receive such a wonderful award from the University.

“I’ve lived in the city for 24 years, my wife and I have raised our family here, and it’s been great to see UCLan grow and develop over that time."

"For me this Honorary Fellowship is a way for me to help the University with areas of leadership, management and communication and for me to bring all the skills I’ve learned in my career to benefit UCLan."

“I’ve been lucky enough to have received excellent advice and coaching help during my career and I believe in giving something back. For me this Honorary Fellowship is a way for me to help the University with areas of leadership, management and communication and for me to bring all the skills I’ve learned in my career to benefit UCLan.”

Offering his congratulations to the graduating students, he added: “I understand how much hard work you’ve put into getting your degrees and this is the start of a new chapter in your lives. I hope you enjoy your careers, work hard, have success and then in 20 years you can come back to the University in Preston to give something back to future graduates.”

During his playing career, the Glaswegian chalked up more than 500 league appearances as a player himself. His professional career started at Celtic, ahead of spells at Cambridge United, Bristol City, Shrewsbury Town and Dunfermline Athletic, before signing for Preston.

David’s managerial success at Preston earned him a move to Everton where he was the manager for more than 11 years. During his time he was awarded the Premier League Manager of the Year accolade three times.

He then replaced Sir Alex Ferguson at Manchester United before having spells at Real Sociedad and Sunderland. He is currently the manager of Premier League team West Ham United and he accepted his award in Preston’s Guild Hall on Monday. 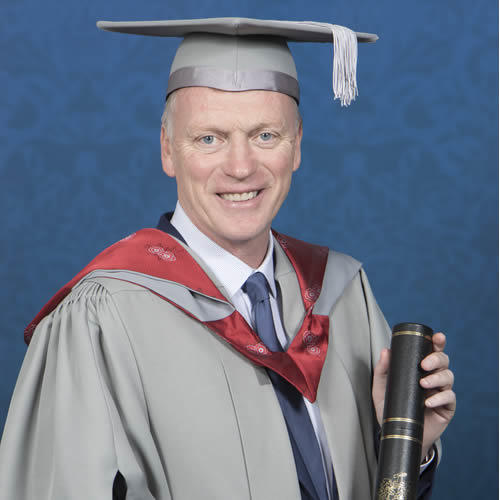