A student from Catterall was inspired to create his final year project after becoming a first-time dad.

26-year-old James Swarbrick welcomed son Oliver last year with partner Helen while studying for a degree in architectural technology from the University of Central Lancashire (UCLan).

James, who works as an architectural technician for Collinson plc, embarked upon a part-time degree in order to balance his day job and new role as a dad with his studies.

But when looking for a nursery for Oliver, he found that none of the ones he visited were suitable, which inspired him to draw up plans for a new environmentally friendly structure that could meet his needs.

The nursery, which would be built in Catterall, has been designed to the German ‘Passivhaus’ standards, an approach which creates low energy buildings.

"I visited the Lancashire Arts Festival myself three years ago and that’s what inspired me to start my degree."

The building’s appearance would reflect the skyline of the nearby Bleasdale Fells, while mirroring the look and feel of the local environment, allowing plenty of natural light and ventilation.

James said: “Lots of houses are being built near where I live and so I think eventually we will need something like this in Catterall for families, as more move into the area.

“Becoming a dad changed my life and gave me a new perspective. It’s great that the University has enabled me to study in such a flexible way, and it’s helped that my tutor Ann Vanner has been brilliant and very supportive.

“For anyone considering a degree at UCLan, I’d say go for it. I visited the Lancashire Arts Festival myself three years ago and that’s what inspired me to start my degree.”

James’ designs were on display at UCLan’s Preston campus from Friday 15 to Friday 22 June as part of the Lancashire Arts Festival Degree Show. 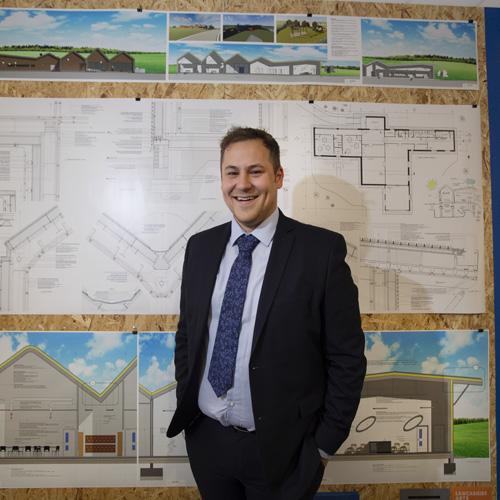 James with his designs.