Work of UCLan Professor on display at Ferens Art Gallery

The work of a University of Central Lancashire (UCLan) Professor has opened on the art world’s biggest stage today as The 2017 Turner Prize exhibition begins in Hull.

Contemporary Art Professor Lubaina Himid MBE was announced as one of the four shortlisted arts for the prestigious prize back in May and will find out in December if she is the winner of the £25,000 prize.

She is up against Hurvin Anderson, Andrea Buttner and Rosalind Nashashibi for the sought after award and the four artists’ work is now on display at the Ferens Art Gallery, in Hull, as part of the UK City of Culture celebrations. The exhibition runs from 26 September to 7 January 2018 and the winner will be announced on 5 December at an award ceremony which will be broadcast live on the BBC.

The Preston based artist, who was one of the pioneers of the British black arts movement back in the 1980s, was shortlisted for her solo exhibitions in Oxford, which brought together a wide range of her paintings, sculptures, ceramics from the 1980s to the present day, and Bristol, which highlighted 100 colourful figures of 17th century African slave servants brought to Europe, as well as her participation in a group exhibition in Nottingham.  Her work includes paintings, drawings and installations that make reference to the African diaspora and to the slave industry.

Turner Prize curator Sacha Craddock commented: “The students in Preston must feel immensely proud of her; she is successful in so many ways at the moment and having the most amazing time with exhibitions all over the world." 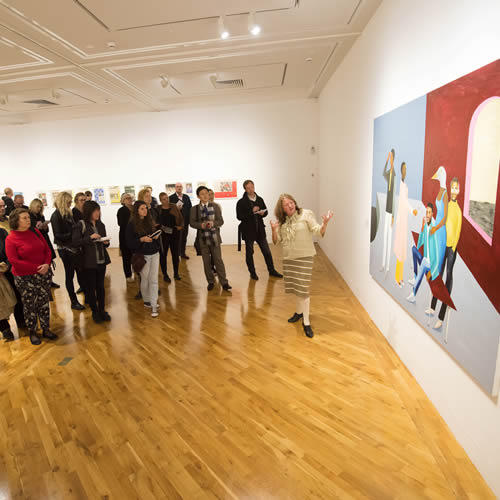 "Working as a curator with Lubaina has been amazing. She is very clear about what she wants her work to do and say and the best way to do it."

“Working as a curator with Lubaina has been amazing. She is very clear about what she wants her work to do and say and the best way to do it. The display and presentation is very much her decision. It’s been fascinating and I’ve learned a lot.”

Lubaina, who was born in Zanzibar and grew up in London, was made an MBE in 2010.  She made the headlines when the Turner Prize shortlist was announced earlier this year because at the age of 62 she is the oldest person ever to be nominated after the award abolished its ban this year on people over 50 being eligible.

One of the best known prizes for the visual arts in the world, the Turner Prize aims to promote public debate around new developments in contemporary British art. Established in 1984, it is awarded to a British artist for an outstanding exhibition or other presentation of their work in the twelve months preceding 24 April 2017.  The prize has previously been won by Damien Hirst, Antony Gormley and Grayson Perry.