The University of Central Lancashire (UCLan) has triumphed in a national higher education awards ceremony by winning the Best Community Engagement Campaign prize for its pioneering UCLan and Ri Young Scientist Centre. The initiative is a collaborative partnership with the Royal Institution of Great Britain (Ri).

UCLan beat off competition from nine other shortlisted universities to win the Gold Award at the Heist Awards for Education Marketing. The recognition follows on from last year when the University won the same award for the hugely popular Lancashire Science Festival.

Commenting on this year’s success Dr Liz Granger, UCLan and Ri Young Scientist Centre Manager, said: “It is a fantastic achievement to have won the best community engagement campaign award for two years in succession. Our YSC is all about inspiring young people and raising their educational aspirations and is part of the University’s wider commitment to social engagement. For our work to be recognised through this national award, in the face of such stiff competition, is incredible.

“Since opening our doors to schools we have engaged over 3500 students with interactive science workshops, but this is only the beginning – moving forward we hope to expand our programme and inspire even more young people across the North West.”

"Our YSC is all about inspiring young people and raising their educational aspirations...for our work to be recognised through this national award, in the face of such stiff competition, is incredible."

UCLan Vice-Chancellor Professor Mike Thomas added: “I’d like to add my congratulations to Liz and the entire UCLan team for their contribution in making our YSC such a magnificent success.

“Deep-rooted engagement between the University and the wider communities of Preston, Lancashire and the North West is an area in which this University excels. The YSC is a real beacon of that ethos and I know it will go on inspiring the next generation of scientists and engineers for many years to come.”

The UCLan YSC has been modelled on the successful L’Oréal Young Scientist Centre at the Ri in London. As the first of its kind in the UK outside the capital, the centre and has been built to encourage interest, learning and creativity in all aspects of science and technology among primary, secondary schools and local community groups.

The centre was officially opened in 2015 by the then School Reform Minister Nick Gibb along with Jamie Edwards, a local school pupil and the youngest person in the world to carry out a nuclear fusion reaction.

The Heist Awards are open to all UK higher education institutions and exists to recognise excellence, innovation and professionalism throughout the sector. In addition to winning the Best Community Engagement Award UCLan was shortlisted in three other categories: Best Undergraduate Student Recruitment Campaign, Best Internal Communications Campaign and the Student Voice Award. 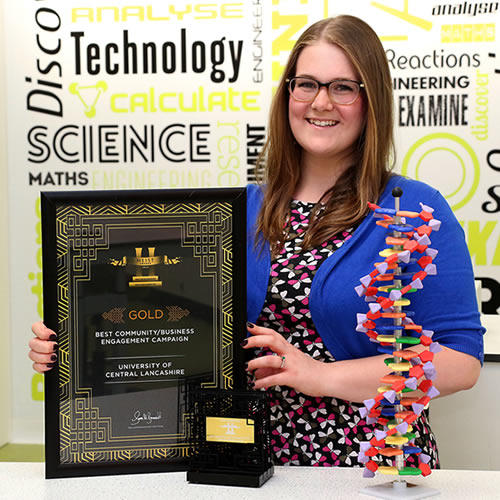