Chaired by Philip Edgar-Jones, Director of Sky Arts, the awards recognise the best audiovisual work created by students across the UK and Republic of Ireland at undergraduate and postgraduate level.

Gaius Brown, a film production graduate, collected the Undergraduate Craft Skills - Camerawork award for his film Lost in Loss. The film was shortlisted for three awards and was praised for ‘good lighting with excellent operating; the camerawork in this film really stood out and showcased the eye for a shot by the director of photography.’

Kath Paddison, an MA Journalism graduate, won the Postgraduate News award for Social Media Shaming. Judges called it ‘an ambitious piece that got under the skin of a topical subject in a distinctive way.’

UCLan has more RTS awards than any University in the North West, with more than 20.

Gaius Brown said: “Winning a national RTS award has been the proudest moment of my life. Making Lost in Loss was such a challenging, exciting and emotional journey and one which I will never forget. It taught me so much about making short films, and the months of hard work and effort from the whole team paid off.

“My award is a result of the collective efforts of our Lost in Loss family; Director Jake River Parker was articulate with his vision of the narrative and the story he wanted to tell which helped guide my visual choices throughout, first AC Jodie Horne was very instrumental in many of the shots where we incorporated movement to effectively tell the story.”

Kath Paddison said: “I was blown away when my name was announced as a winner. It was a risk to give up work and go back to University as a mature student, while at the same time juggling family life, and so much was riding on doing the course. I’m overwhelmed to have won this award, and grateful for the support of my family throughout the whole process.

“The UCLan journalism MA has amazing industry links and gave me a lot of confidence, which has opened so many doors for me. It just shows that it’s never too late to go for it.”

Linda Sever, Senior Lecturer in Film Production, said: “Film Production at UCLan has been championing the RTS Student Awards since 2002 and has been winning regional awards since 2003 and, more recently, national awards. Combined with Animation, Screenwriting and now Journalism, we have more than any other University in the North West.”

The winners were announced at a ceremony held at the BFI Southbank. 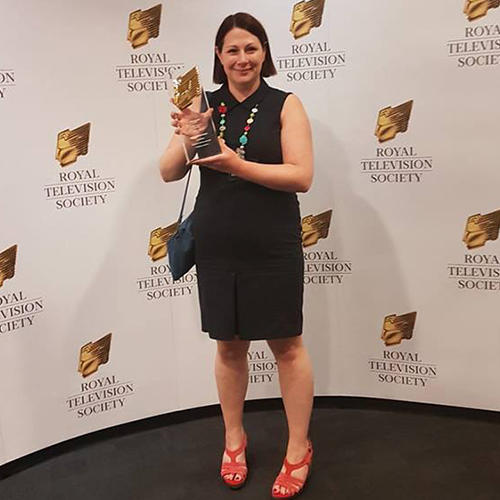