A professional table tennis player has achieved a ‘lifelong ambition’ by graduating from the University of Central Lancashire (UCLan) with a Postgraduate Diploma in Elite Coaching Practice – and securing a dream role in the process.

Andrew Rushton became coach of the British Paralympic table tennis national team towards the end of his studies and has just returned from the Para European Table Tennis Championships in Slovenia, where his team won gold.

The 34-year-old from Salford credits his degree with helping him to impress at interview, as questions focused on topics he’d become an expert in thanks to his course.

He also says UCLan inspired him to make the leap from club coach to coaching the national team, because it was only through a module focusing on values that he discovered more about what he wanted to do within his career.

Now a father of two, Andrew first picked up a table tennis bat at the age of seven and earned his first Great Britain call-up aged 12, but the former Walkden High School pupil left education at an early age.

"Graduating is such a personal achievement for me because it’s something I’ve always wanted to do, but people said I never could. I’ve achieved a lifelong ambition and that feels fantastic."

He said: “I’ve been in sport my whole life, first as a player and later as coach, but the academic side of things has never been my strong point. Graduating is such a personal achievement for me because it’s something I’ve always wanted to do, but people said I never could. I’ve achieved a lifelong ambition and that feels fantastic.”

Part of the UK Coaching Framework, Andrew says he chose to study for his PGDip at UCLan because he’d heard positive things about the course and its tutors – and he wasn’t disappointed.

“My tutors were amazing and really challenged my ideas and my belief system. They asked questions about why I was doing what I was doing which helped me to look at the bigger picture and discover more about my own values. The course completely changed my perspective which is when I realised my previous role wasn’t right for me and I set my sights on coaching at national level.

“When I interviewed for the position of Paralympic coach the questions focused on philosophy which is what I’d been studying as part of the degree.

“I want to say a big thank you to my tutors, John, Brian and Craig. Without them I wouldn’t have achieved what I have.”

Now Andrew and his team are working towards winning more gold medals at the Tokyo Paralympic Games in 2020, after taking home 10 medals in the European Championships.

Andrew graduated in front of family and friends at Preston’s Guild Hall during UCLan’s winter ceremonies. 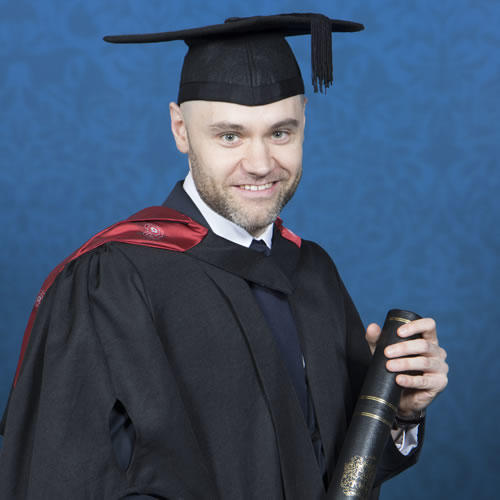