Jointly hosted by the University of Central Lancashire (UCLan) and Preston City Council, Preston was the seventh European city to take part in the City-zen Roadshow; a €22million European Union (EU) funded project that brings internationally celebrated experts in architecture, technology and environmental sustainability together with local residents to explore new living ideas.

The project initially focused on Broadgate and saw local councillors, businesses and residents work together to come up with sustainable ways to improve the local carbon footprint. The team found that, on average, households in Preston produce seven tonnes of carbon dioxide per year, which is in line with the EU average.

Ideas include energy cascades running across the city down into Broadgate, where high-level heat energy from recycling processes would makes its way through underground district heating pipes into people’s homes. Preston train station could have a local and global side, where the local side facing Broadgate would include a new community connecting tram and public square. Contributors also felt that Broadgate needs a centre with local shops selling local produce. This could lead to the river edge, which is made softer to allow people to better engage with its potential through activities such as rowing. A river promenade and green network would increase the number of people cycling to work in Preston from 1,400 to 10,000, vastly reducing the need for cars that are currently suffocating the city.

"It’s a really good initiative and one we fully support. Climate change is a pressing issue of our time and as the Government hasn’t taken the lead, it is down to cities to take it up."

UCLan Professor of architecture Craig Martin is the City-zen Roadshow leader. He said: “We’ve spent an intensive week working with local businesses, councillors and residents on sustainable future city solutions for Preston. We’ve focused on Broadgate, but many of the ideas can be applied to other areas of the city. Our proposals may at first appear radical, but they are actually formed by the place itself and are needed to respond to a massive challenge – climate change. This week we’ve learnt that sustainability isn’t for experts to solve alone, but for everyone to come together and contribute. Sustainability is not about sacrificing something, but instead getting value and enjoyment out of our neighbourhoods and better connecting them.

“At the start of the Roadshow, citizens understandably ask how much these designs will cost to build? But by the end, the question is how much will it cost if we don’t build! In terms of our children’s children future health, energy security economy, happiness and survival.”

The leader of Preston City Council, Councillor Matthew Brown and Interim Chief Executive Adrian Phillips both attended an energy workshop at the Gujarat Hindu Society, Broadgate, as part of the project. 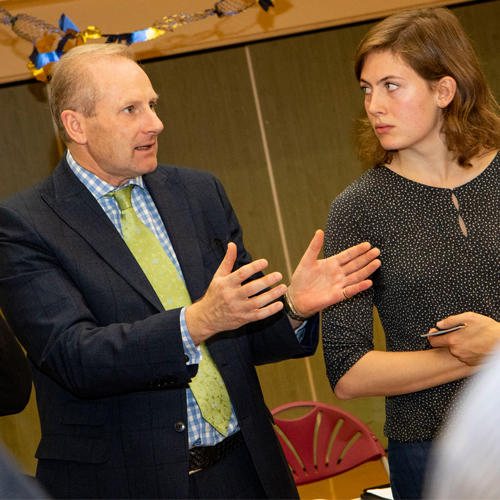 "Our proposals may at first appear radical, but they are actually formed by the place itself and are needed to respond to a massive challenge – climate change."

Councillor Matthew Brown said: “It’s a really good initiative and one we fully support. Climate change is a pressing issue of our time and as the Government hasn’t taken the lead, it is down to cities to take it up. We’re a progressive and forward-thinking Council and we’d be foolish to not look at ideas such as this. Some of the ideas I’ve seen today have great potential, such as implementing locally produced energy, and we want to take forward plans that are realistic and deliverable.”

Adrian Phillips said: “The Council is an influencer, but we can’t make changes alone and need valued local partners, such as UCLan, to implement positive change. The City-zen Roadshow brings together people with various expertise to come up with ways to improve how people enjoy living and working here and, at the same time, make it more energy efficient. Preston has its challenges such as pollution, congestion and poor home insulation so I’m excited to see some innovative ideas on the table that local residents can play a part in developing.”

Local architect John Bridge is based on Winckley Square. He commented: “I welcome projects that get people talking about regeneration and this is the perfect conduit to do this. There is nothing stopping us from turning Preston into a clean energy city. We don’t need to copy what other cities are doing, we can come up with our own exciting ideas.”

The results of the Roadshow were presented to Preston City Council on Friday with the hope that some proposals will be considered in future developments.