UCLan hosts an evening with father of modern British cycling

Hundreds of local cycling enthusiasts listened to cycling legend Chris Boardman discuss his record-breaking career and his life behind the microphone during his visit to the University of Central Lancashire (UCLan) last night.

The Olympic gold medallist shared stories from his long-awaited autobiography Triumphs and Turbulence at an ‘In Conversation with’ event at the University, hosted by BBC Radio Lancashire’s John Gillmore, with opportunities for fans to meet him.

The father of modern British cycling first sprang into the public eye when he won Britain's first cycling gold medal in 72 years at the 1992 Barcelona Olympics astride the infamous Lotus bike. His career flourished through his combination of physical ability and technical preparation. The father-of-six won three stages of the gruelling Tour de France and set numerous world records, several of which still stand.

"It was fascinating to learn more about one of the most well-known figures in British cycling history."

After his road and track cycling career ended he led the research and development team for GB Cycling in the run up to the Beijing Olympics. The group became the most successful British sporting team of all time. Chris, who hails from Hoylake, is also a much-loved voice in the commentary box as he co-presents television coverage of the Tour de France and major global cycling events, including the Olympics.

Dr Adrian Ibbetson, Head of the School of Sport and Wellbeing at UCLan, welcomed Chris to Preston. He said: “We are delighted to welcome Chris to UCLan to share stories of his outstanding career with the people of Preston.

“It was fascinating to learn more about one of the most well-known figures in British cycling history.”

Lee Spoor, a triathlete and member of local club Tri Preston, met Chris and spoke to him after the event. Lee commented: “Chris was quick-witted, funny and interesting all at the same time and a nice guy to boot. He has also mastered his impression of German cyclist Jens Voigt which was delivered to perfection. It was definitely a worthwhile evening.”

The one-off evening was organised by Silverwood Events and was a Lancashire Science Festival Fringe event. View photos of the event on UCLan's Flickr gallery. 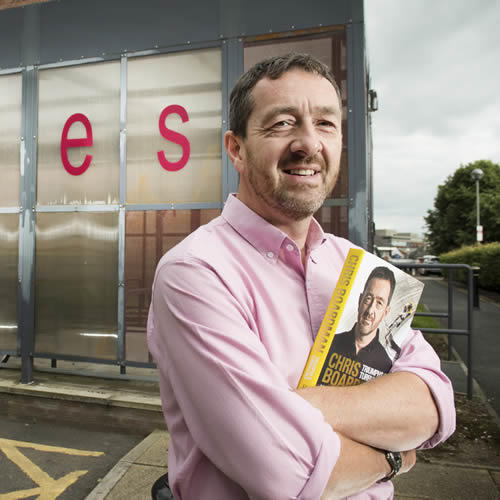