An engineering student from the University of Central Lancashire (UCLan) has won The Safety Award presented by The Institution of Agricultural Engineers (IAgrE).

Kevin Shuttleworth, a third-year BSc Honours student in Agricultural Machinery Engineering, was handed the prestigious prize at an annual awards event organised by the IAgrE; a professional membership organisation for all those working in, or with an interest in, agriculture and the environment.

The awards are open to agricultural engineering students across the country and Kevin beat off stiff competition to win the Safety Award. This award was established to encourage and recognise innovation in safe design or operation of equipment or processes by students of subjects relating to engineering in the land-based sector.

The 22-year-old from Ingleton said: “It is a great privilege to be award the Safety Award 2019 by IAgrE for my end of year project, which focused on the health effects for the operator as a result of exposure to acceleration, whilst operating farm machinery (agricultural tractors) during their normal working day.

“The findings of the report concluded that up to 62% of field operations hold the potential for the operator to sustain musculoskeletal disorders, as a direct result of exposure to high levels of acceleration. This report has now been presented at the Agriculture for Life, Life for Agriculture Conference 2019, held by the University of Agronomic Sciences and Veterinary Medicine of Bucharest, Romania.”

The students’ projects where judged based on a report illustrated by diagrams, drawings and/or photographs. Illustration by films, videos and similar electronic techniques were used to illustrate research findings.

Kevin received his award from Professor Jane Rickson, President of the IAgrE, at the Institution's annual awards event that took place at the National Fluid Power Centre in Worksop.

The IAgrE is made up of a professional body of engineers, scientists, technologists and managers in agricultural and allied land-based industries. 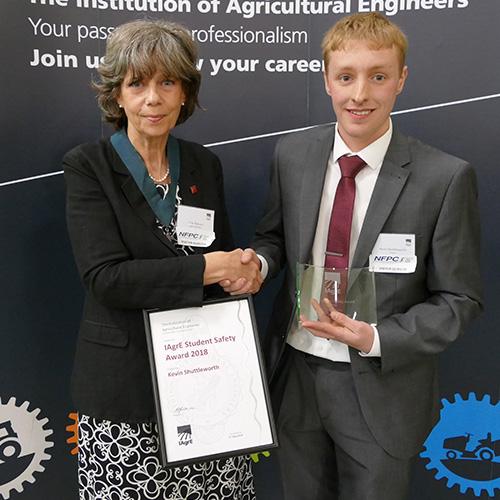