Acting students step back in time for community project

A new play portraying the drama of life in Whittingham Asylum as World War One draws to a dramatic conclusion will premiere on the old asylum site at Whittingham & Goosnargh Sports & Social Club on Wednesday 24 October at 7.30pm.

‘Whittingham 1918,’ written by Eric Northey, is based on research into papers on Whittingham Asylum, held at Lancashire Archives. It examines the terrible effects that the First World War had on asylum life throughout Britain, with particular focus on the impact of Whittingham.

In partnership with Lancashire Archives, the University of Central Lancashire (UCLan) and UNISON, the play is part of Whittingham Lives, a two-year arts and heritage project exploring the history and legacy of Preston’s Whittingham Asylum, from its opening in 1873, through to its final demolition in 2016.

Eric said: “Whittingham Asylum was in its day, one of the largest, leading asylums in Europe, catering for over 3,000 patients. It fed people, housed them and gave them meaningful work to do. But when the First World War came along, the entire asylum system was battered by this conflict. Whittingham had to deal with nearly 1,000 shell-shocked soldiers.

“War always has many victims, some far away from the battlefield, whose lives are changed forever. This included women, who had to keep the hospital going whilst the men were at the front, as well as feed their families when food was short. They were the key members of the National Asylum Workers Union (NAWU) who fought successfully, despite the war, for better wages and conditions for mental hospitals and their patients. It is these hidden dramatic stories, we are trying to tell.”

"This has been a fantastic opportunity for a cast of seven UCLan acting graduates and four current third year students to work on Eric Northey’s fascinating play."

The play is under the direction of Terence Mann, who is Course Leader of UCLan’s BA (Hons) Acting course. It uses a mix of professional actors and final year drama students from the University.

Terence said: “This has been a fantastic opportunity for a cast of seven UCLan acting graduates and four current third year students to work on Eric Northey’s fascinating play.

“For some it’s their first paid acting job, for others it’s a chance to work with fellow graduates from the past and present. In working on the production, cast and creatives have immersed themselves in the incredible world of Whittingham Asylum.”

Performances of the play are free and will take place at Whittingham & Goosnargh Sports & Social Club on Wednesday 24 October and at St Peter’s Art Centre, UCLan, on Thursday 25, Friday 26 and Saturday 27 October. All performances start at 7.30pm and tickets can be obtained by searching ‘Whittingham 1918’ on Eventbrite.

Please note, due to the nature of the play performances are not suitable for those under the age of 16.

Community groups have joined with the Whittingham Lives Association, University of Central Lancashire (UCLan), Lancashire Care NHS Foundation Trust and Lancashire County Council to creatively record, interpret and celebrate the history of the hospital so that the legacy and heritage of this institution is preserved for future generations. The play forms part of a series of programmes exploring the 150-year history of Whittingham Asylum.

The Whittingham Lives project has received nearly £70,000 from the Heritage Lottery Fund and Arts Council England. 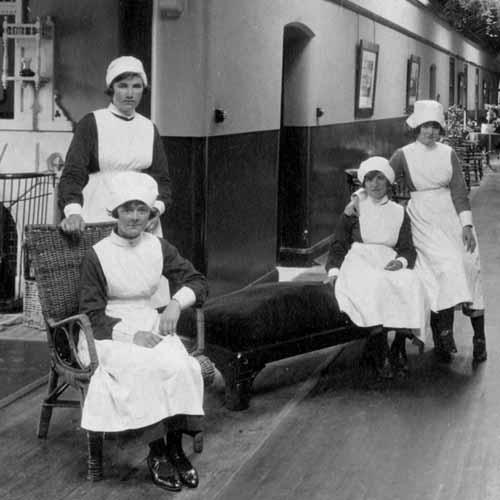