Second year student John Green beat more than 40 students to win the competition which was run by Aardvark Swift, a company of award-winning recruitment specialists across video games, toys and licensing sectors.

John said: “It was great to win Rising Star. It’s really satisfying knowing that what I have learned at University so far has enabled me to make a feature rich game that people in the industry have recognised as a well-designed game.

“My game was a 2D spaceship game that the user could build their own custom ships and fight with them against other players. I made sure to set realistic time frames for when I wanted features to be finished, and had other students test my game after each development stage. This somewhat guaranteed that my final game came almost fully bug-free.”

"I believe the reason my game did better than the other competitors came down to how I planned and managed the development of my game."

The 22-year-old, from Carlisle, added: “My lecturers provided me feedback on the development plan and on how the game looked and felt. I didn’t get my lecturers to review my code as I wanted to get industry feedback on a codebase that was 100% my own, and to make it fair on the competition.”

Every year, Aardvark Swift runs a competition for students which initially included just programming graduates but they have since expanded the competition in order to allow undergraduates to participate.

UCLan have had previous success in the Search for a Star category but were yet to win the Rising Star award prior to John’s success.

Gareth Bellaby, Senior Lecturer for computing games development, expressed his pride at seeing John win the competition and hopes that this will encourage people to choose UCLan as their university to study the course.

“I’m incredibly proud of John to have won the competition,” said Gareth. “He’s competing against undergraduates from a lot of universities and the quality was so high. The fact he has won is very much a demonstration of his abilities as well as being a very strong demonstration that the course here at UCLan has got it right due to the fact that we are producing students that the games industry wants." 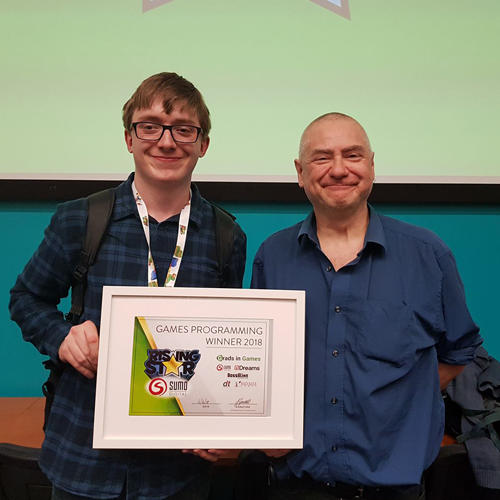 "When they gave out the awards, they were very complimentary about both his technical skills as well as the fact that he was very helpful to others throughout the process."

“I’m very much hoping that the message John’s win sends is that it is a very good course to come on here at UCLan. It’s a rewarding course if you have the talents. If you are interested in the programming side in developing games, it is certainly a course that will give you the skills and the knowledge to get a job within the games industry.”

A free link to John’s game can be found here