Our Movement Analysis Laboratory is one of the top facilities of its type currently in use in Europe.

It is equipped to conduct: advanced motion analysis, force measurement, electromyography, accelerometry, pressure measurement, muscle and strength assessment and thermal imaging. There are also a number of custom made pieces of equipment used in the lab that have been developed with commercial partners.

The lab also houses a date processing unit which is located on the first floor and includes a suite of twelve high specification computers. Computers in the Lab and processing suite are linked via an internal network which allows data to be transferred directly from the acquisition computers to the processing suite. This facility makes the lab ideal for researchers to collect, analyse, and securely back up data with any of the systems in the laboratory.

The Movement Analysis Laboratory supports the work of the Allied Health Research Unit.

Thermal imaging is possible at UCLan through a Flir A40 camera, from which data can be analysed in standard and custom written software. Thermal images may be quantified. The mean temperature of a specific area can be recorded, or a temperature distribution over a specific area. There are links between with the skin surface temperature and muscle function, however there are also clear links with the sympathetic nervous system. Sympathetic fibres are very thin and unmyelinated. They are probably therefore especially vulnerable to damage. When sympathetic fibres are disturbed changes in the vasomotor activity can be expected in the innervation area and changes in skin temperature follow (Comstok 1986). The exploration skin surface temperature may therefore provide insight into the function of the affected sympathetic fibres. Tchou (1992) stated that all vasoconstrictor nerves belong to the sympathetic system, therefore skin temperature is an indirect measure of sympathetic activity. As skin has an emissivity (Heat transfer coefficient) of 0.98, it is essentially transparent to heat and acts as a window to the vasculature beneath it.

Isokinetic testing was originally a tool used mainly in exercise science and the only isokinetic movements available were concentric (with no thought given to isotonics, isometrics, continuous passive motion (CPM) or range of motion expansion). Eventually, isokinetics found its way into therapy albeit with very rigid machines usually specific to a joint or small numbers of joints. In the early 1980's (around 1984) the world of isokinetics changed dramatically. Servo motors and microprocessors transformed the early machines into fast and dynamic tools offering instant data analysis and reproducibility. This now meant that real time data became available and testing became as important as exercise. Today isokinetic dynamometers are used for the measurement maximal isometric contractions, muscle balance tests, pathology diagnosis and in rehabilitation, these machines are now incredibly versatile allowing for measurements from almost all of the joints of the body and with additional kits to test functional activities such as driving or opening a door.

Electromyography (EMG) is the electrical activity associated with muscle activation. Nerve impulses cause twitch responses in muscle fibres, these combined cause the bulk contraction of a muscle. This is produced by the depolarizing of motor units, often referred to as Motor Unit Action Potential (MUAP). The electrical signal produced has a magnitude and a frequency response. Both these measurable features allow not just the onset of the muscle action but the size of the contraction in the form of motor unit recruitment but also the rate of depolarizing in the form of changes in the frequency response. This latter feature is particularly important in the study of fatigue.

Why is pressure important to the foot?

Excessive pressures can cause tissue damage.

Pressure can be a main cause of ulceration.

Assessment of pressure may be able to predict when and where ulceration might occur, allowing the clinician to prevent serve damage taking place.

The F-Scan ® system provides bipedal plantar pressure and force measurements on the feet using paper-thin reusable sensors placed in to the patients’ shoes. The system instantly detects, displays, and records plantar pressures and forces without interfering with normal gait pattern for the truest measurements available. The quantitative information shown will enhance your ability to evaluate, substantiate, and document your diagnosis. With the F-Scan system, you get a view from inside the shoe.

The XSENS MVN motion capture suit uses miniature three-dimensional (3D) gyroscopes, accelerometers and magnetometers. This system requires no cameras and do not require markers to be ‘seen’. Therefore they can be used indoors and outdoors regardless of lighting conditions. The combination of the three types of sensor allows the tracking of each segment in six degrees of freedom of up to 17 body segments. 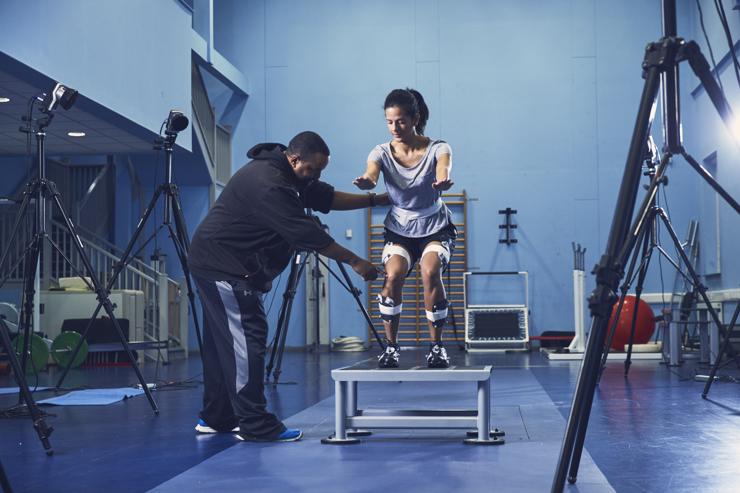