Candice Satchwell, Professor of Literacies and Education at UCLan and Nick Palfreyman, co-Director of UCLan’s International Institute for Sign Languages and Deaf Studies (iSLanDS), led on this project which aimed to allow deaf young people to tell their stories.

Local deaf leaders in Indonesia were given training to lead workshops to help young deaf adults (aged 18-25) identify important themes from their experiences. Findings from interviews with hearing parents of deaf children also fed into this process. Three stories were then developed as animations with Indonesian sign language as narration. The resulting set of resources benefits multiple stakeholders: deaf children and their parents, teachers, and employers.

One of the problems identified by young deaf Indonesians in creating these films was lack of access to deaf education, therefore additional QR-GCRF funding was secured to December 2020, which enabled the study to pair The Little Hijabi Deaf School, Indonesia (TLH) with Happy Hands School for the Deaf, India (HH). The collaboration is run by a pair of facilitators: one affiliated with HH, and one from the iSLanDS research hub in Indonesia, working with TLH.

This collaboration allowed the project to:

These partnerships built on existing relationships between UCLan and these organisations in Indonesia and India and allowed them to conduct additional research activities to share knowledge and experiences between deaf communities in the respective countries. Crucially, the involvement of the partners in Development Assistance Committee (DAC) countries has enabled them to develop sustainable relationships with one another, allowing ongoing peer-to-peer support across countries.

The benefits of these workshops to participants include having their stories heard, as well as being able to take part in the activity of making films, with roles such as story development, narration and creating background art for the stories. The partnerships are leading to an increase in understanding from hearing family members and teachers, and the development of good teaching practice in deaf communities. Distribution of the films among deaf and hearing communities will raise awareness of issues faced by deaf young people and their families, and the films will be an educational resource for deaf children.

This project sought to tackle gender equality in a number of ways, and prioritised female representation from the outset of the project. Five of the 12 workshop participants were women, , which was possible largely due to trust that has been built up between the local organising team and the deaf community.

During the running of the workshop itself, the participatory nature meant that female members had the chance to share their own ideas, and one of the strongest stories came from the experiences of two female participants. One of the stories was then told by a female narrator, which is relatively rare for online materials in BISINDO (Indonesian Sign Language). Artwork for two of the three stories was produced by female artists from among the group.

Finally, the workshop was attended by an overseas visitor – Sandra David, a deaf teacher of deaf children from the UK – this was significant as it was the first time that most of the participants had met a female deaf role model from overseas. 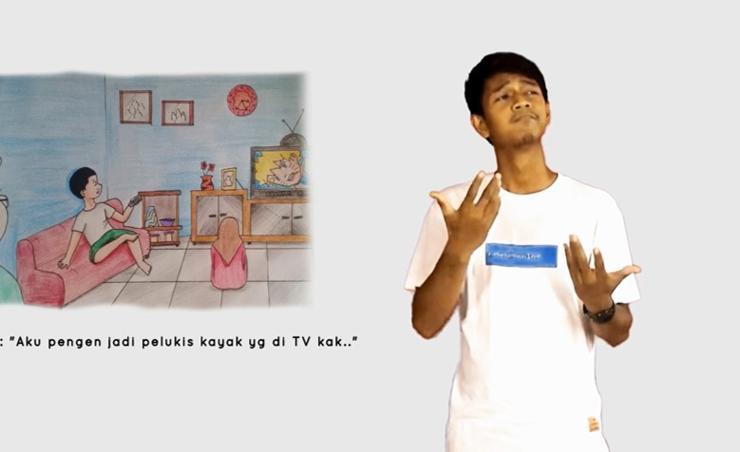