University of Central Lancashire graduate, Craig Spence, has achieved world-class status in his career and is working as Chief Brand and Communications Officer of the International Paralympic Committee (IPC).

In his role, Craig is responsible for the global media and digital media strategy for the whole Paralympic Movement, working with PR experts from over 170 countries as well as various sponsors and broadcasters. In addition to overseeing the media and communications team, he has responsibility for the overall delivery of the Paralympic Games, commercial and broadcasting, protocol and hospitality. He is also responsible for the IPC’s global reputation and works closely with the President and Chief Executive Officer.

The aim of Craig’s role at the IPC is to raise the profile of Paralympic sport and Paralympic athletes around the world, highlighting the impact their work has on changing attitudes towards disability, as well as driving social inclusion. 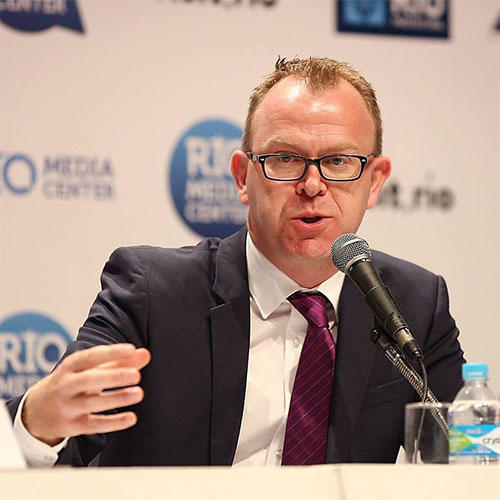 Prior to studying at University, Craig originally wanted to be a journalist but after reading through various prospectuses he realised that he was better suited to a career in public relations. Craig chose to study BA (Hons) Public Relations at the University of Central Lancashire because he liked the concept of public relations and journalism students working closely together. This and the fact he had a Leeds United season ticket and wanted to live close enough to get there for the games.

Following graduation in 2000, Craig went to work for a small PR agency in Derby for nine months before moving back up north for a role in the press office at Yorkshire Water, where he was involved in an innovative media campaign to promote tap water. Craig said: “The highlight of my role at Yorkshire Water was launching Diet Tap Water live on breakfast TV on April Fool’s Day. Around 10,000 people called the Yorkshire Water call centre wanting to sign up for the miracle water and various news channels fell for the prank.”

He continued: “It was a very tongue in cheek stunt but had a serious message that tap water was the best value for money health drink available. I was part of a really fantastic team.”

Following his time at Yorkshire Water, Craig joined a Leeds based PR agency and spent three years working for a range of high-profile clients and in 2006, Craig went to work for the Rugby Football League (RFL) as Communications Manager. His role at the RFL was to look after the Super League and Challenge Cup competitions, the England national team as well as the reputation of the governing body. This job gave Craig a good introduction to sports governance and in 2010 he moved to Bonn in Germany to become Director of Media and Communications for the IPC.

Besides his major role in the Paralympics, Craig has also had to deal with many issues that have hit the headlines around the world. This has included the Russian doping scandal, the Oscar Pistorius murder trial and the death of an athlete during the Rio 2016 Paralympic Games.

Reflecting on his career so far, Craig felt that the success of the Rio 2016 Paralympic Games was by far his greatest achievement to date. He said: “The lead-up to the Games was fraught with difficulties but went ahead as planned in the end.”

Off the back of the Games, Craig was proud that his team were awarded the 2016 European PR Team of the Year and he received the accolade of European Communicator of the Year. Craig also won a UN Sustainable Development Goals Action Campaign Award for inclusion in 2019 and is a member of the IOC Press Committee. In addition to all of this, he was an independent director of the Yorkshire 2019 UCI Road Cycling World Championships.

Speaking about his career, Craig said: “To organise something as big as the Paralympic Games is quite amazing. It’s awesome to be involved in one of the world’s biggest sports events, but it’s even more satisfying to see the impact the Games have on changing attitudes towards disability.”

Looking back on his University experience, Craig has some lasting memories. He said: “The three years I spent in Preston were very wet, but an outstanding experience. The friends I met at UCLan are friends for life.”

He continued: “Since leaving University I’ve worked with a lot of public relations graduates from various universities, but you can always tell the ones from UCLan as they have a greater understanding of how the media works.”

When asked what advice he would give to prospective students wanting to follow a similar career path, Craig advised: “Ensure that you do as much work experience in the industry as you can during your studies. By getting that experience under your belt early you’ll find you’re one step ahead of other graduates with no experience when you apply for a job.”