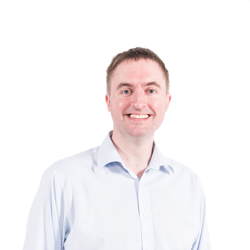 Nick is a deaf academic working in the fields of linguistics, sociolinguistics and international development. He has worked with the Indonesian deaf community since 2007, and is particularly interested in Labovian and third-wave sociolinguistics, sign language typology, applied linguistics, and corpus-informed sign language teaching. As co-Director of the iSLanDS Institute at the University of Central Lancashire, Nick has a strong record of using research to transform the lives of deaf people in the global South.

Nick is committed to continuous community engagement, and shares knowledge and research skills with Indonesian Sign Language users in accordance with the iSLanDS Institute’s long-term aim of empowering community members to conduct research on their own language. In 2014 he and Muhammad Isnaini established PUPET, a deaf research centre based in Java run by local deaf consultants, to create a continuous sign language research presence in Indonesia.

As a Leverhulme Trust Early Career Research Fellow (2016-19), Nick documented patterns of variation in Indonesian Sign Language (BISINDO), with a particular focus on the expression of identity and how deaf people exploit variation to generate social meaning. His efforts to apply social constructionist approaches to sign language research were acknowledged at TISLR12 (January 2016), the largest international sign linguistics conference, where he was awarded Best Presentation by an Early Career Researcher.
Nick's first monograph, published by de Gruyter in 2019, compares varieties of BISINDO, uncovering examples of grammaticalisation in the expression of completion and negation. He assembled a corpus of conversational data together with local deaf assistants, and uses corpus data to identify linguistic and social factors that influence lexical and grammatical variation.

In December 2014, Nick facilitated a two-week workshop on leadership and organisational development in Lucknow with deaf participants from India, Nepal, Jordan, Indonesia, Uganda and Burundi. He wrote and delivered sign language variation and academic writing modules at the first African Summer School for Deaf Studies in Accra, Ghana, in 2019.

In July 2019 he hosted a Symposium on Sociolinguistic Variation in Signed and Spoken Languages of the Asia-Pacific region, which led to a special issue of the Asia-Pacific Language Variation journal. Nick has been a regular presenter at the Indonesian Linguistics Conference (KOLITA) hosted by Atmajaya University, Jakarta. He also co-ordinates the SIGN Conference series, which has previously been held in Turkey, India, China, Brazil and Poland.

Nick has previously advised UNESCO on sign language endangerment, and served on the WFD Expert Committee on Sign Languages and Deaf Studies from 2015-19. He is on the editorial board of the Ishara Press/de Gruyter Sign Language Typology Series, and edits the open-access Ishara Research Series.

Signed languages exhibit just as much variation as spoken languages. Both within and between urban centres across the vast Indonesian archipelago, the lexical and grammatical variation is compelling, but requires a good understanding of how Indonesia’s deaf community is changing over time. Nick’s research on BISINDO (Indonesian Sign Language) encompasses domains such as negative and interrogative constructions, numeral systems, manual alphabets and mouthings, all of which contain fascinating examples of variation that are often linked with factors such as region and age, schooling and ethnicity. BISINDO has been documented in the cities of Padang (Sumatra), Pontianak (Borneo), Solo (Java), Singaraja (Bali), Makassar (Sulawesi) and Ambon through the creation of the BISINDO Corpus, which contains over 46,000 tokens. This rich resource has been transcribed, and is currently being annotated. Analysis of larger amounts of data, in particular, enable patterns of grammaticalisation to be examined in more depth. The collection of sign language data in the global South raises particular ethical questions, especially linked with informed consent. Equally, the documentation of regional signs in BISINDO is important given the dominance of variants used in Java. A sign language corpus has great potential to transform other areas of deaf development too, such as sign language teaching. Nick works with colleagues at PUPET, our Indonesia research hub, to deliver training to Indonesian deaf people on how to teach sign language, with a view to improving the capacity of BISINDO teachers. The iSLanDS Institute is passionate about the transformative power of research, and two recent PhD students have sought to measure the impact of our work by using concepts linked with agency and the Capabilities Approach. In 2020, for the first time, PUPET is working with friends of iSLanDS in India to facilitate a South-South exchange between deaf teachers.